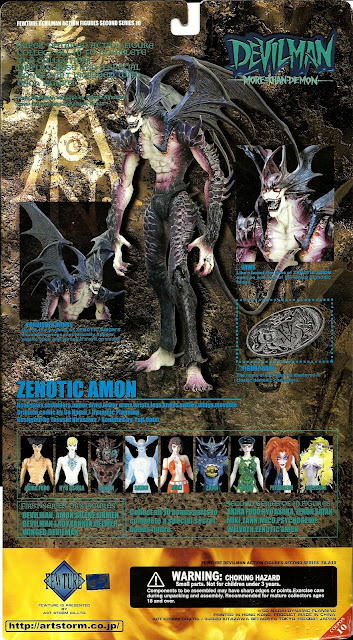 ﻿﻿﻿﻿﻿﻿﻿﻿﻿﻿﻿﻿So this is Zenotic Amon from Series 2 of the Fewture Devilman run. A series given the title: "More than Demon". They did a Winged Devilman and an Amon figure from the first series, and while Winged Devilman was superior to all others, Amon was also not too bad. They've always had great direction with this entire line and did the total sweetness when they mixed the two character designs. A fusion of both figures, which were already similar but had been given their own unique touches (way more so with WD), combined all in a hard crackling chocolate shell.

According to artistic designer Yasushi Nirasawa, 'this is Amon from the first series, though more Demonic' (however that is possible). Just 'like the first Amon figure, he's got his Skull ring', and the 'brutal expression on his face is confrontational to other demons' who would be stupid enough to step into his path. The third version of Amon was ridiculously buffed and red like hellfire, while the first was a bigger, badder and elongated version of Devilman. Zenotic Amon is more of a new version of Winged Devilman with a lot more black, and instead of the fur that covers Amon, he's got pointy scales. He's also got one more special feature and it's a favorite of mine... yes, I'm talking about that bloody palm. The one with the Skull ring too. Looking like he just bitch slapped the blood out of someone. Heh!

﻿﻿﻿﻿﻿﻿Oh, and regarding those pointy scales, I will tell you that these fuckers sure got a sadistic streak in them to sculpt such a sharp toy. You cannot pick this guy up without stabbing yourself in fingers, palms or wrists. I imagine if I were ever to step on this thing in the middle of the night, not only would my feet bleed, but I would end up screaming a lot of shit that would wake the neighbors in sheer terror. Laugh it up all you want ladies, but your painful toys are different than ours... uh, this figure's got a ball joint (though limited movement) neck, hinged jaw (yes it opens and closes), double hinged shoulders, hinged elbows and wrists, hinged legs and knees, and finally ball jointed and hinged ankles. That's 18 points of articulation altogether, with unfortunately no waist movement﻿﻿﻿﻿﻿﻿﻿. His wings, which are removable, also have a tab point on each one wherein the wings can extend outward. His tail, which is also removable, features a tip which is like a mix of the "inner mouth" from Alien, with the mandibles from Predator. Freaky to say the least, but cool as Fuck.

﻿Despite over about forty sharp points that'l hurt you (and that's not counting all the points, just the sharpest ones) I can't put this guy down. Winged Devilman is a bit scary to hold and fuck around with since the wings on that figure are hard plastic, they're thin and I'm just constantly worried that if this thing even falls one time it's broke. Zenotic Amon has these removable wings that are soft plastic and fold up which is a wee bit of a relief, but the downside to this softer plastic is that over time depending on their position, they'll bend or droop. That again is a problem with some of the other Devilman figures, as a few (original Amon is the most extreme example) are top heavy and the feet will bend forward since it's a solid plastic work - aside from arm, elbow and neck joints.
﻿ 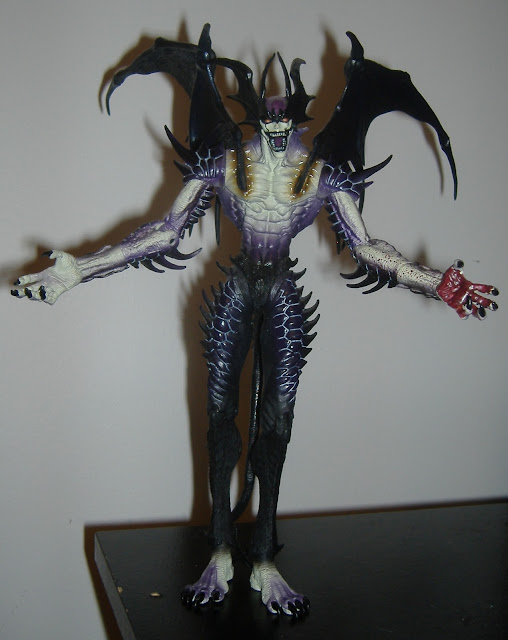 Zenotic Amon stands against few others in this and the previous series as the most badass and insane looking figure. ﻿By far one of my favorites, but for now it's too hard to choose teh bestest. Perhaps, in time, after I have posted on each figure, we'll see which is the true masterpiece of insanity.