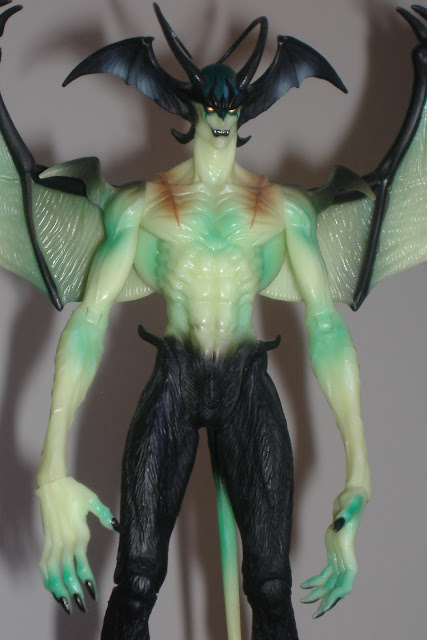 All of the figures from Fewture Models were released, as I mentioned earlier, not only in their original versions but also in repainted special editions. Every figure had a black version which was very common to find in comic shops, as they are quite unremarkable and nobody was buying them. They suck! It's just a black plastic figure with some silver paint highlights. They're fucking horrible and should burn in the inferno. The limited Festival repaints as well as a many of the other Limited color versions were stunning to say the least. Many of them featured vibrant and sometimes psychedelic paint schemes, and there were a lot with translucent plastic and far superior colors to the originals. There were also some pretty straight up transparent versions of figures, all ranging in colors and some with no color at all.

The second Devilman series went heavier on the gimmicks, accessories and took things to a whole new level in regards of the standard figures. The one standard character from the first series that got a real gimmick feature (apart from a superior mold job like Gelmer and not counting his tail's skeleton prop) would be Winged Devilman, with his Glow-In-The-Dark skin. He's also the only other character apart from Gelmer with removable parts. Each wing on WD is removable, and Gelmer's tail can detach. Devilman doesn't always display his wings so this is a welcome addition to the toy, whereas Gelmer's tail isn't really meant to be taken off and is a bit unnecessary. Unlike the standard black and blue tinted skulls base that half of the figures came with, WD's comes with a GITD base as well.

Luckily for everyone, Winged Devilman is a completely new mold of the character. And that's not to rag on the original Devilman figure from the line, but looking at them side by side you would think that WD would be from Series 2. The original Devilman toy is severely lacking. He's got the worst sculpt job out of every character from each series (that's twenty altogether), which is crazy because he's the main character! It's as if this (and perhaps the original Amon as well) were the test molds to show off and get funds before sculpting the other characters. Devilman, Amon, WD, and Zenotic Amon were all sculpted by the same person: Yu-ji Oniki, so I can only assume that time and money had something to do with this. Original Devilman has some weak old-school straight cut neck and shoulder joints and tabbed elbow joints while Winged Devilman has a slanted neck joint, shoulder and wrist joints, tabbed elbows, knees and ankles.

Even the paint job is Vastly improved on WD. They both have gold colored eyes, but while on Winged D the eyes are bright and outstanding, the eyes on Original D are dull and lifeless. My Devilman figure must have been painted hastily and without regard, because there is some shoddy work here which only helps bring out those horrendous ab muscle work. Overall the whole production of Winged Devilman seems like a labor of love that these guys really took their time on. It is really a special figure that was skimped on at no point. One scary decision about this figure though, is the choice of plastic for the wings. They are mold injected, very hard but at the same time, very slender and fragile. Care must be taken not to let this figure fall to the ground as the sharp points on these wings could snap off on impact. That however was the collaborated choice of the toy's creators, as they didn't want the wings to ever "droop".

Winged Devilman is my favorite toy from not only the first series, but both of the series lines. A hard decision to make, I assure you, but it's not too hard to see why. The sculpt is sheer perfection. The colors are perfect, as is the paint job. And aside from being slightly top heavy and tipsy due to the combination of ankle joints and long outstretched wings, the design is top drawer. 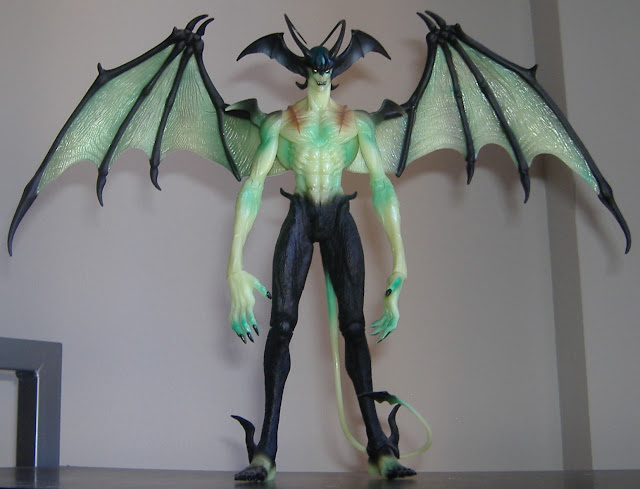 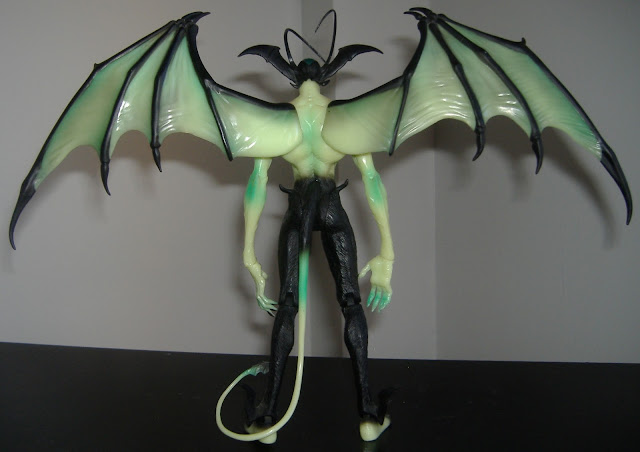 Ah, Winged Devilman. Such as sinister, yet beautiful looking creature. More to come on this one...
Laid to Unrest by DrunkethWizerd

Damn! I wish more toys glowed in the dark, I love that feature! Devilman is pretty cool, except for the live action film. That sucked. Mind you the breasty bad lady wing head thing is always nice to see!

Might be tricky, but any chance of some glowy photos?