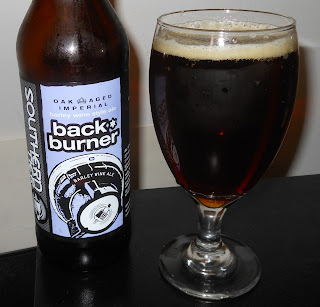 About: "Long ago, British farmhouse brewers made special ales using the first runnings of the mash. These beers, now called barley wine, are brewed in the tradition of days past. At Southern Tier this long awaited brew is placed on the back burner until the start of the new year. It’s conceived in three small batches, using voluminous amounts of barley and hops. The process starts early in the morning and ends late into the night. We hope this rare brew reignites your spirit for another trip around the sun. Kettle Hops: Chinook / Aroma Hops: Willamette / Dry Hops: Amarillo, Centennial / Malts: 2 Row Pale, Light, and Dark Caramel."

Thoughts: Poured a dark, red-grape color with a tiny, slightly tan off-white head that faded within twenty seconds. You can see through this beer to a point, like the shape of your fingers for instance, but only in front of light. It looks very pretty clean, and has very little carbonation which is to be expected.

Wonderful oak finish that slowly creeps throughout the taste, starting off soft and then just delivering the beer's taste to a beautiful end. Loads of caramel and dark fruits in the flavor here, a tingling from the dry hops and an oaked essence all the way through. It's very peppery, utterly sweet yet with a mild touch due to that aging, and the hops are really on showcase this time around. Perhaps I didn't notice them too much in the original version, or if maybe the oak is bringing them out even more, but it's a new year and this beer still kicks some major ass.

Mouth feel is medium yet lighter feeling, frothy and disintegrates easily. It leaves flavor clinging all over the brain and inside of the mouth which lasts a super long time. Let it warm, it tastes even better. Imagine for a moment what only time could do to this one. This one is fresh, and is fantastic. 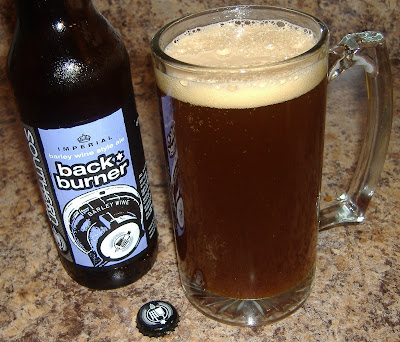 About: "Back Burner Barley Wine is a celebration of things to come and things remembered. It’s conceived in three small batches, using voluminous amounts of barley and hops. The process starts early in the morning and ends late into the night. We hope this rare brew reignites your spirit for another trip around the sun." Stats: 2-Row Pale Malt / Light and Dark Malt / Kettle Hops: Chinook / Aroma Hops: Willamette / Dry  Hops: Amarillo, Centennial."

Thoughts: Poured a deep red, hazy and almost cherry color with a short bubbly head that fizzled itself away.

Smells intense. Sweet. Malts come through first. As it warms slightly, the Hops can be felt. Balance seems very well done as it goes back and forth. It's got one of those smells that I could enjoy all day long.

The taste just blows me away. So very sweet. Tingles the tongue, then when the taste overflows it's like another plane of life, an out of body experience. I could feel this brew throughout my whole body. It went through three insane stages fairly quick: "Wow" then "Holy Shit" then "Damn...", huh, perhaps I'm at a loss for words! Those are the things that my brain produced with my first mouthful though. It's like smoke and cherries. Tangy. Caramel and oats, dark fruits and alcohol, sugar and molasses, light campfire and bitterness, all with an incredibly subtle after burn.

It's a mouthful. But the taste is so damn good that there's no problem gulping it time and time again.

I think I'm in love with this beer. I fall in love way too easily, but this is my favorite Southern Tier so far. And that says something since the other two I've tried have all been totally spectacular. Barley Wine is quickly becoming my favorite of all beer types. I just haven't met one that I disliked so far. I mean, I love pumpkin brews, but some of those items I tried this year were just plain uninspired (I guess that happens with different gravities or mainly: when a company just doesn't give a fuck). But oh man does this stuff drive my brain insane!

Email ThisBlogThis!Share to TwitterShare to FacebookShare to Pinterest
What the... Barleywine, Barrel Aged, Beer, Southern Tier