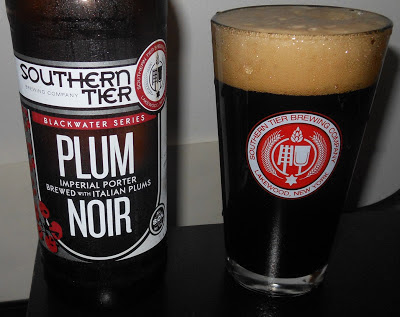 About: "Plums are a diverse group of species, somewhere between 19 and 40 depending on who you ask. We’re only concerned with what we consider the best to brew with – Prunus cocomilia. The Italian plum has beautiful dark skin color and the flesh is perfect for fermentation. We’ll add puréed plums directly to the fermenter where they will add another fermentable component – their residual sugar. The beer will be dry, and have a sweetness derived mainly from the type of malts we use. A bit of the plum flavor will still be present, and it will have a slightly less roasty character than our imperial stouts have had. Hints of plum, hints of coffee from the roasted malt and a thick head. FOOD PAIRINGS: Particularly tasty with chocolate desserts, roasted or smoked foods, barbecue, Gruyère cheese. Malts: 2 Row, Caramel, Chocolate, Debittered Black, Barley Flakes / Hops: Chinook and Willamette / Puréed Italian Plums."

Thoughts: The look is black, or at least very dark... hardly any light can get through this beer. A purple-ish, dark caramel brown perhaps? The foamy two-finger head was actually pretty light of a tan color.

First scent is some gentle roasted coffee for the most part. Loads of dark malts, chocolate and caramel. It's semi-sweet smelling. Any hop characteristic is very subdued, though the brew is still cold. Am I getting plums? There's a bit of a fruitiness here, but it's ever so soft.

Taste is slightly spicy, not too bitter... it's gentle. A lot of grass on the back end of that first gulp, and not a lot of sweetness. It's got a toasty sensation to it, and tons of malt assault. The pureed plums are merely an afterthought at this point, popping up for a split second just before it settles into aftertaste. There's a lot of graininess to the taste here, but nothing that particularly pops out at'cha.

Mouth feel is really foamy, and it dissolves quickly leaving a somewhat dry feeling. It's not all that drinkable since it puffs up in the mouth and gets a little weird. It's bubbly and crisp.

Sad really, I'm about one fourth through this bottle and I'm feeling a bit disappointed. I know that Porters are probably my least favorite style aside from brown ales, but there have been some special exceptions with both. Just as with other Porters, I would have rather liked to have a Stout in its place. I'm going to let the second half of the bottle warm to room temp before I even type any further.

Meh. This has to be the least favorite beer I've ever had from Southern Tier. Which is really fucked up, because I have loved all of their beers. I went into this one expecting some violent flavor beatdown, but instead was greeted with blandness and unremarkable sorrow. What the fuck ST!?

I would have tried this beer because a) it's from Southern Tier and b) it has plums in it. It sounds like I would have been disappointed, so I'm glad I read your review. I'll just grab a 2x IPA or stout the next time I'm looking for some Southern Tier goodness.