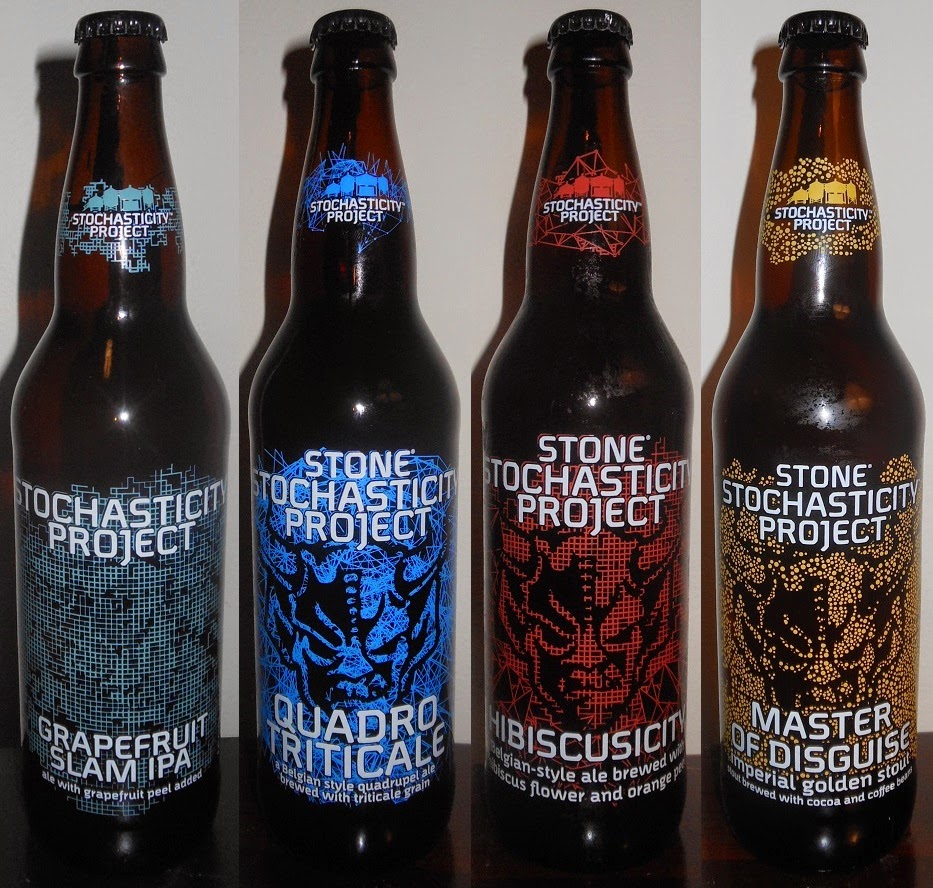 About: "India pale ales harness the inherent flavor characteristics of hops to bring forward familiar flavors of pine, resin, spice, and citrus. In some cases, those botanicals are so potent, they exactly mirror specific edibles. Such is the case with Centennial hops, which hail from the Great Northwest and come across on the palate like a mouthful of citrus fruit. That sensation is amplified with this, the first beer introduced via the Stochasticity Project - a double IPA brewed with Centennial, Chinook and Magnum hops as well as an immense dosing of fresh grapefruit peel. The result is over-the-top bittersweet grapefruit intensity that is at once refreshing and bracing in its citrusy bitterness. MALTS: North American Pale, Light Crystal / HOPS: Centennial, Chinook, Magnum, Centennial (Dry Hopped) / SPECIALTY: Grapefruit Peel." 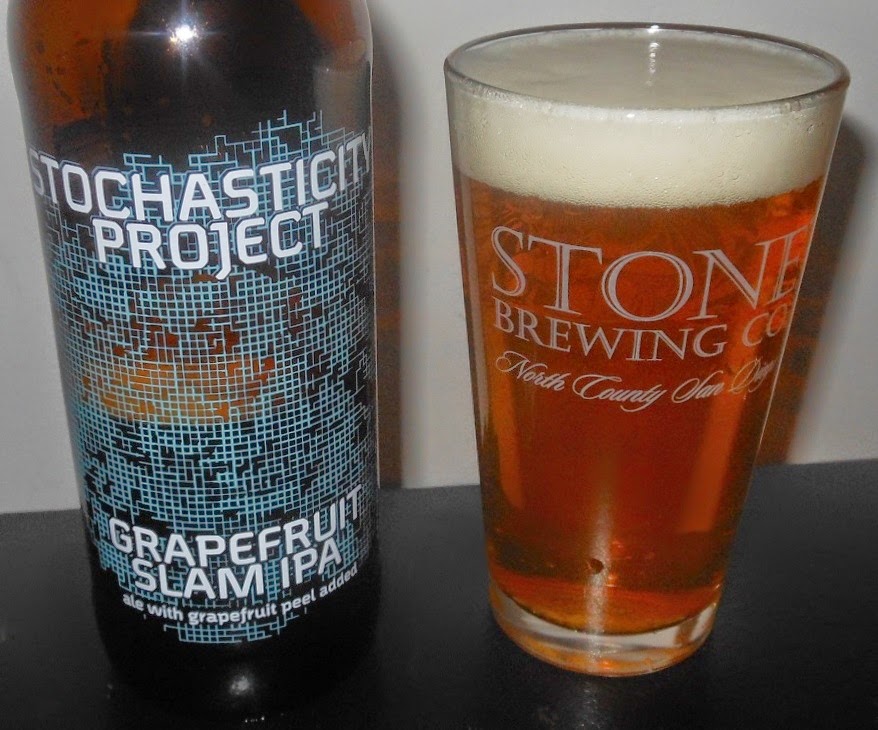 Thoughts: Bottled 1/23/14. Drank 2/23/14. Don't know what the hell this is or where it came from, but it looks like a Stone bottle and was alongside all the Stone beers so I figured what the hell. Slam poured an extremely clear golden yellow color with some mild carbonation and a one inch fluffed out ultra white head on top. It's been a while since I've seen a beer this clear, should I be worried? The scent is really good. There is a ton of grapefruit in there just as advertised. Seemingly nice balance. Not too bitter, not too sweet... the hops aren't too strong and neither are the malts, but they're both flowing in unison here and it's a mildly sweet brew. It's nicely bright and citrusy, and smells inviting.

There's a ton of hops up front on this one and they're all great. We've got soft grass, tons of pine, a heavy dose of resin and massive amounts of grapefruit. All of them are intermingling and yet, they all pop up one at a time to say hello, which is nice. It's a very bittersweet beer that has a very welcome sweetness to go along with the heavy "slams" of bitter that are thrown at the tongue. It's got a very bitter characteristic to it, though it's not overly bitter at the same time. It's borderline perfectly balanced and has a certain strength to it, though it's not all that heavy. There's a ton of that grapefruit zest all over this one and it's nicely done. Mouth feel is a little oily, slick and somewhat foamy. This is a very enjoyable beer. If you're into Double IPAs with citrus sensations that are quite bitter but have a palate saving sweet side to them, then give this one a chance. 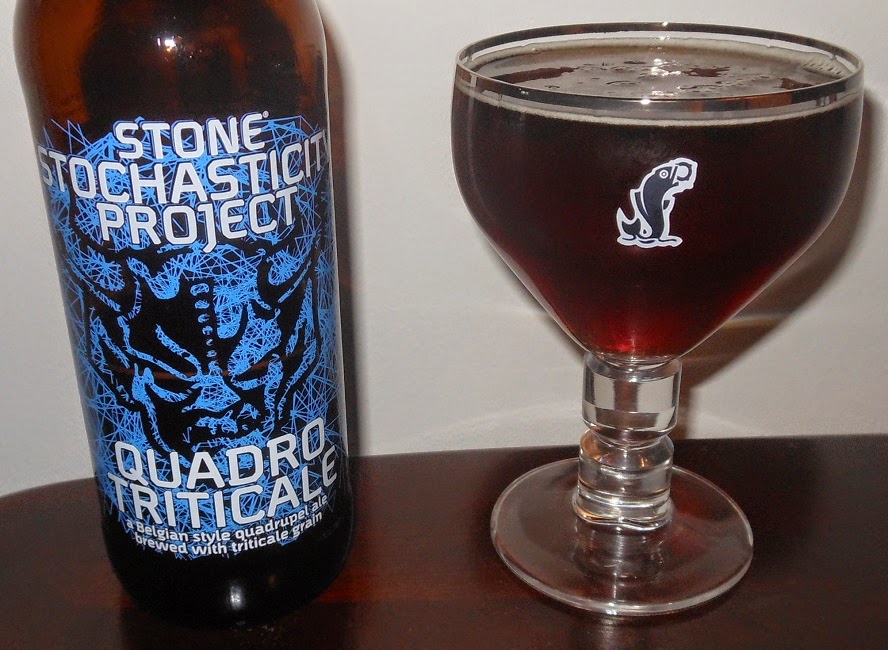 About: "Trappist ales as we know them have a proud lineage dating back nearly a century. Rather than follow the footsteps of the monks who forged the quadrupel - the warmest and darkest of monastery offerings - we aimed to test its inherent makeup. In doing so, we added triticale, a hybrid grain combining the pleasant flavor of wheat with the elemental durability and spice of rye, to breathe new life into the malt bill. Because of this, this reimagined brew comes across differently than its classic Belgian predecessors, and beautifully so. Lower in sweetness, but rich with flavors mirroring dried fruit, it’s a modern interpretation of one of the most historically sacred styles on earth. MALTS: Pilsner, Flaked Triticale / YEAST: Belgian Ardennes Strain / SPECIALTY: Dark Candi Sugar."

Thoughts: Bottled on: ??? (Sometime in May or June). Drank: 6/15/14. I cracked the bottle and got a whiff of this pungent shit from a foot away. Poured it into the glass and it looks like a light raspberry juice. There's hardly any carbonation at all and the beer looks somewhat cloudy. The head was barely there and when it had settled, left what looks like a huge spiderweb clinging to the corners all around the glass rim. It's pretty cool looking. Smells of strong Belgian yeast, and it's kinda dirty and raw. The wheat/rye hybrid that they've used in this is heavy hitting and just fuckin' in your face. The first whiff I got was nearly off putting, but once I gave it a little time it started smelling more and more drinkable.

First gulp and I'll tell you I expected to have some sort of overpowering blast of craziness, but was instead met with gentle, soothing, sweet and malty niceness. It's soft, very very clean tasting, smooth and has a really low level crisp aftertaste. Surprising to say the least. I thought for sure I was going to be smacked upside the head with rye and then across the face with that wheat... but it's all just so gentle and blended together seamlessly. The alcohol in this is not even noticeable at all. It's just sweet and soft and pleasant and actually pretty good. Still, there is a rawness to this that is pretty damn thick. It starts off sweet and sultry, then gets down and dirty, but it never goes too far in either direction. All in all, it's pretty nice. 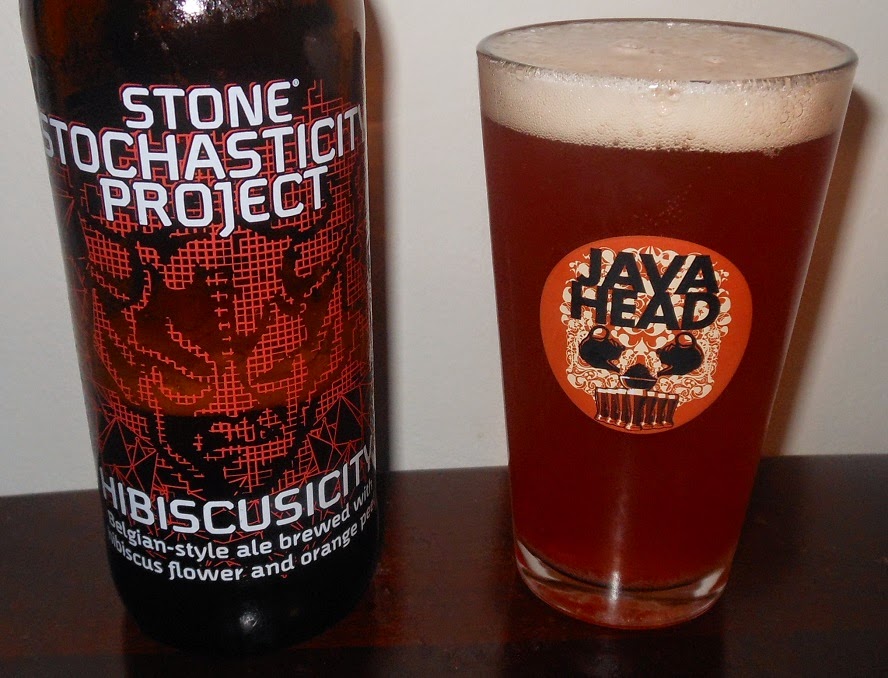 About: "In pushing the beer envelope, we aim to advance imbibers options for something far beyond run of the mill with this immensely thirst-quenching alternative. As original as the tongue-twisting name we coined for it, this robust Belgian-style ale is brewed with wheat, hibiscus and orange peel, bringing forth floral and citrus notes against a brilliant pink hue. MALTS: Pale, Wheat / HOPS: Magnum, Sterling / SPECIALTY: Orange Peel."

Thoughts: What in the hell is a hibiscus flower and why do I suddenly want it inside of me!? That is tonight's question, and the answer... is beer! Well apparently there are a million species of this flower, so yeah, that's pretty cool I guess. Wow. This is one bright pink beer! Looks like they might have used the red or pink ones. The smell is very floral, who would have thought!? It's not the heaviest of scents... there's mostly wheat and citrus peel. A seemingly nice balance of pale malt and herbal hops.

First gulp and man, there is something really cool going on in this beer. These flowers and orange peel take a solid balanced brew to a fun and interesting level. Slightly tart, sweet enough to cover any bitterness or heavy citrus, a little plain... but man it is floral and that's what matters in this one, because you can really taste the pedals, the stems, the leaves. I'm totally serious. Those three things resonate within this beer, as if you've been chewing on edible flowers. It's cool. It's slightly spicy, but it's a real mild one, and there's no real kick anywhere once the initial floral shock wears off. Overall this one is nice and mild, tasty and just a little bit lovely. It doesn't get too perfumy at all which is totally awesome, because if it did that would cloud the mouth. This one falls back aproprialtely and leaves a clean comfortable aftertaste. Nicely done. 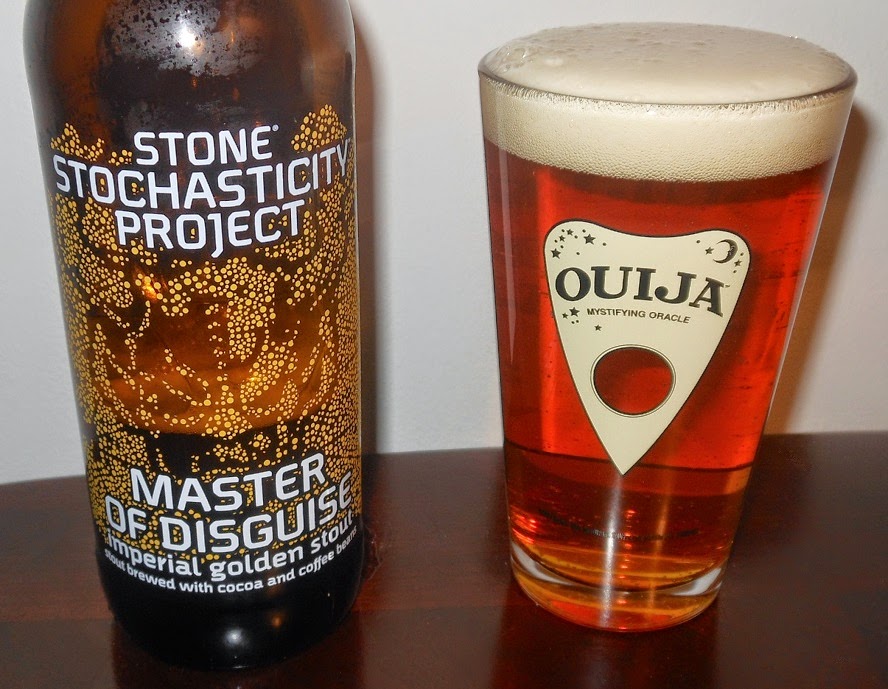 About: "Some illusions and misnomers lead to life's most delightful surprises. Case in point - this beer, the yang to the yin that is the Black India Pale Ale. Once revolutionary for its onyx appearance, it is now an accepted and beloved member of the India pale ale family. Thus we took the spirit of a dark beer - the time-honored stout - and applied a similar science of thought, brewing it to be golden-hued. Cocoa and coffee beans impart roastiness sans darkening to this brew, while flaked oats provide an enveloping mouthfeel. The result is a stout that looks more like a blonde, but is a raven beauty at heart. MALTS: Carapils, English Amber, Pale, Flaked Oats / HOPS: Liberty, Nugget / SPECIALTY: Cocoa, Coffee Beans."

Thoughts: Looks like quite the deceptive beer we've got on our hands here. The back of this bottle makes reference to the Black IPA, and describes that as the Yin to this beers Yang. Interesting. This golden beer is incredibly clear, features a short frothy white head on top and smells just like freshly ground coffee at the supermarket. Hints of cocoa lay underneath it all, as does a quick burst of nuttiness.

First gulp and I'm hit with an unbelievably strong blast of coffee, followed by mild chocolate and then a quick explosion of oily and resinous hops. It's pretty cool. This was bottled on 11/4/14, and I'm drinking it 12/6/14, just thought I'd throw that out there. This series of beers so far has been pretty cool, I wasn't sure of it at first since I did't realize just until now what the spectrum Stone was going for was going to be. But as of now I'm looking forward to the next in the series.

It's some pretty smooth drinking. Not weighed down at all. It's not too light, but it is crisp and airy. It's so smooth though, even with that burst of bubbles at the beginning of each gulp. It slides right down the gullet and like I've said before, I'm not really one for coffee ground flavors all up in my shit... so for me to say that I recommend this means something. It's very balanced overall and comes off pretty slick.