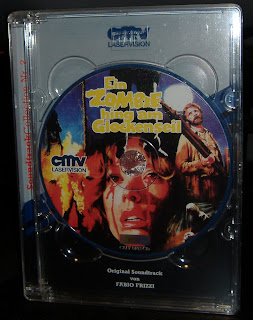 What is it you think of when you remember Lucio Fulci's 1980 grimy-ass psychedelic (grimedelic, if you will) film, The GATES OF HELL! ...? Do you recollect some inexplicable Nightmare of spiraling madness and utter decay? Do you fondly think back upon your walking, moaning, groaning blow up mistress Betty CumWetty? Do you think of... the Funk? No, not Betty's funk after a nightly pop, but rather the pulsating beats, tolling bells, paranoia inducing whistles and triumphant brain-eating zombified marching tunes of one Fabio Frizzi! Damn fuckin' straight.

Aside from the completely irrational (some may say) and satisfying (some may argue) storyline... and aside from some visuals that will melt the outer coating of your brain only to leave that shit draining out from your nostrils... and aside from beautiful film grain... there's one thing that takes Fulci's film to the ultimate next level of will-crushing anxiety and night terrors: The Score, baby. Let me tell you something kids, if you're looking for the ultimate in bad acid trips I suggest tongue kissing about six or seven tabs with a nice gothic girl and putting this CD on repeat for the night's session. Just being sober and listening to this in a dim room itself will have you tripping balls! Yes, it's that powerful. And man, did the Fulci / Frizzi collaboration really f'n strike teh proverbial gold this time around. Not to knock The Beyond or Zombie2 down to silver and bronze, but this 28 Minute score paired with the film itself is, for lack of a better word, just fuckin' magical. Whimsical, even.

CMV Laservision released this CD Limitierte Sondeauflage Von 500 Exemplaren!, which means that there's somewhere around 500 of them floating around there in space (Mine is numero 080). I bought it in 2003 when I believe it first came out, and though CMV doesn't have any true "cover art", nor is any of the text in english, the art on this picture disc is f'n Amazing looking! Behind the disc is a picture of poor Catriona about to get a pickaxe through the face, a nice touch to say the least. The back has two nice stills, one of little Billy desperately trying to escape the grasp of the preacher and another of our hero sportin' mad wood. Plus, who doesn't dig that German title font they've got goin' on there? And in glorious yellow, too. When I close my eyes I can see this thing wiggling around like a horde of maggots.

Soundtrack & Release: 10/10 For absolute sweeetness. Find it, if you can.
Laid to Unrest by DrunkethWizerd

Email ThisBlogThis!Share to TwitterShare to FacebookShare to Pinterest
What the... CDs, Fulci, Horror, Movies, Soundtrack, Zombies

Great start Drunketh! I wish I had more CMV releases, I only have their Last House on Dead End Street which has a few exclusive extras.

Where did you get this soundtrack all those years ago? I've never any of CMV's CD releases available to buy...

...and you're right about Gates of Hell, it's a classic in every way.

To tell the truth for twice, I honestly can't remember where I got em(I'll have to check records). It was probably something easy like Amazon back then. Nobody was really looking for these until about a year or two after they came out. I've got CMV's Gates, Demonia/Ratman, and Damonia (Aenigma). So, three Fulci films plus Ratman. Never got the other three (Conquest/ManhattanBaby, House by the Cemetery & Living Dead @ Morgue), which I regret... but you do what you've gotta do for that time so... I suggest searching CMV Laservision CDs, once you do that, search the original title of the CD, and just keep checking until you find a place that has one or two.

Come to think of it, I think I used to see CMV releases at dtm.at (check out their .

I assume the sound quality is good?

Also check out their reviews, got some weird shit buried there.

Welcome to your new addiction Erik!

Newer Post Home
Subscribe to: Post Comments (Atom)
My words are my own and as of posted from their creation forward I hereby claim originality to them. Pictures may prove to be promotional items and are the sole possessions of their respectful owners and/or companies. I do not sell, nor do I buy. I only rent, so therefore, nothing I own is truly mine.