Praise the dark lord and pass the lubrication! 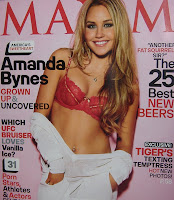 ...a few months ago after ordering two cheap arse DVDs I said what the hell to a survey and got three year-long magazine subscriptions for $2 each. Much to my sigh filled apathy, two of those were Rolling Stone and Maxim. The other, Entertainment Weekly, while being pretty much half a trash mag, I can't help but take it on my trips to lab. Rolling Stone and Maxim are not what they used to be, man I'm tellin' ya. (The last two good RS mags were the tribute to Hunter S and the Asia Argento cover.) Not that Maxim was really ever a "good" magazine, but the first five issues I got were bland as shit! And not only is that annoying, but the pictorials of the cover girls are like two pages long... I mean, what the hell is that!? Give me ten pages at least, and a foldout while you're at it. There's no incentive to even buy the mag either, since all the shots are posted online. What I'm saying is basically Maxim is worthless on paper. Fuck it, I'll just come out and say it... the only worth that paper Maxim has got, is that it's built up a rep and can lure in chicks that may not otherwise, strip down to tha bra and panties.

Chicks like Amanda Bynes, for instance. Take a look at that cover. No, really... look at it. Yeah. Alriiiiggghhhtt... that's what I'm stalkin' about. Though I'm sure she's been wanting to do something like this (hasn't she already?) for a while. And look at that, 25 best new beers too. Hey Maxim, keep this shit up and I may actually open your magazines more than twice from now on.
Laid to Unrest by DrunkethWizerd

Email ThisBlogThis!Share to TwitterShare to FacebookShare to Pinterest
What the... Babes, Magazine

Saw her Maxim spread myself a few days ago, color me surprised and aroused.

I'm kinda in the same boat... I had a free Blender subscription that abruptly ended due to the mag tanking, so they replaced the remaining issues with Maxim. For the most part Maxim is too much boring frat boy humor and not enough of the hot cover chicks. But, there have been a few gems over the years (the last Milla Jovovich issue was pretty dope). I think this latest issue definitely falls into that category.

Oh yeah. I just want to put it out there that I wholeheartedly endorse Ten Fidy imperial stout. Gonzo Imperial is my favorite porter/stout, but Ten Fidy is a close second. If you enjoy a tough beer, check it out.

Maxim is always such a tease.