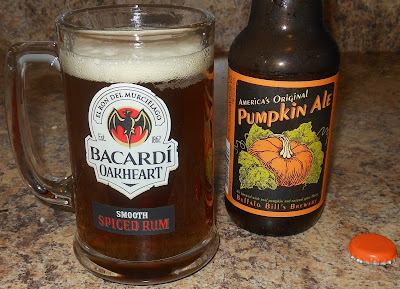 About: Can't find no info, so I'll type what's on the box: "In 1983 Buffalo Bill's Brewery opened their doors, pioneering a bold new direction in craft brewing, firing up America's ground-breaking micro brew stampede. Today, as one of the nation's oldest brew-pubs, we continue to offer you a great selection of outstanding brews, including year-round favorites as well as seasonal specialties."

The scent is of a lot of nutmeg first off, then... water, and a dirty mash / water mix with some very light cinnamon backing it up. Just a hint of the cinnamon around the end actually. It smells OK, but it seems pretty bland. Nothing striking, nor exciting.

Huh. It tastes pretty murky too. There's a smokiness from the clove, a sourness from the mash, and a haze of dust from the cinnamon and nutmeg. Eh... um... and a very bland finish. It's kind of like Natural Light mixed with some pumpkin spice. Yeah, I'm not digging this one at all. This beer is far too watered down and generic tasting and I'm actually pretty pissed off now that I had to buy a six pack just to try it. Not good.

Mouthfeel is a little tingly, but still very light and watery at the same time.

Meh! I do dig the orange cap... which is probably the only personality that this fuckin' beer has at all. Looking at the bottom of the sixer I notice (in the advertisement, or showcase if you will) that they also make a four pack of Imperial Pumpkin Ale. Well, fuck me sideways with a crooked squash, I wish I had stumbled upon that one to try instead of this shit. Maybe that one's actually worth drinking. And the sucker in me will snatch it up just to find out, even though this version of their ale sucks complete balls. Let's hope that never happens though and I can just drink enough to get this experience out of my memory.

...still better than Pumpkinhead though. If only slightly. Congratulations to the second worst pumpkin beer I've ever had!

I loooove the pumpkin ale bottle! It makes me want to taste it.. :P

Been wanting to try their imperial pumpkin ale for a few years now, but I've never found the fucker. I just see this one every year, and quite frankly there are a lot of better pumpkin ales to take up a spot in my fridge. If you ever find the imperial, please post a review!

Thanks. I'm looking forward to it!