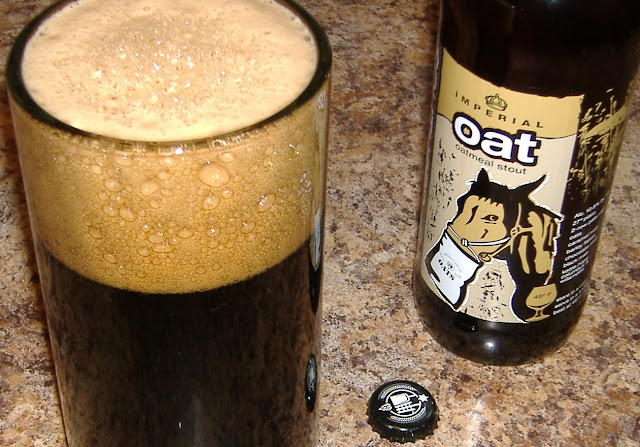 About: "Brewed for the harvest. This beer begins in spring when oat seeds are sown as soon as the soil can be worked. Meanwhile, select types of barley are planted with hopes that Mother Nature will be kind. Our brewers wait patiently until the legumes are mature and ready for the scythe. Upon delivery to the brewery, these ingredients are mixed together in the mash tun where they steep, creating a rich molasses-like liquid. Spicy hops are boiled with the thick brew, giving balance and complexity. Brewers yeast feasts upon the rich sugars, concluding its transformation into oatmeal stout. Malts: 2-row Pale, Caramel, Chocolate, Black / Hops: Columbus and Willamette / Oats / Barley Flakes."

Tangy alcohol, tons of caramel malt, bitter almost chalky, barley and oats. There's a sticky sweetness to it. The hops at the end make it a little weird, especially after how roasted malty it is to begin with. It's not really sour or bitter, but "dusty" rather. Little grimy. And this stout is definitely a lot sweeter than other stouts I have tried. It's not coffee or chocolate bomb, but a twangy candy oatmeal. Not chocolate milk, but oatmeal or cereal... I remember there was this Quaker Oats oatmeal back when I was about twelve that had a syrup packet in it (that looked like red goo - cherry I think) that you could mix on top. This tastes just like it. Plus alcohol.

It's not as thick as I expected. A thin medium that tastes more like syrup than it feels.


Well I'm still not really too much into stouts, and this will probably end up being my least favorite out of the Southern Tier line. Just for that bit of old stale candy funk the hops deliver. It really pales in comparison to their Choklat. Which isn't necessarily a bad thing considering Choklat is one of the most insane and flavorful beers out there. Otherwise, overly and perfectly enjoyable.

Email ThisBlogThis!Share to TwitterShare to FacebookShare to Pinterest
What the... Beer, Imperial Stout, Southern Tier