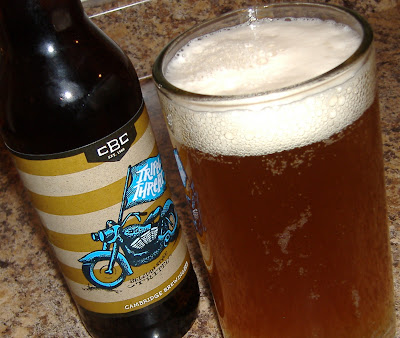 About: "...CBC was the first American brewery to create and produce a Belgian-style beer. Our tripel went on to win our first ever Gold Medal at the Great American Beer Festival, in 1991, before there was even a category for 'Belgian Ales'. Tripel Threat is fermented with our proprietary Belgian yeast strain and brewed using imported Continental malts, hopped with Spalt and Goldings, and very lightly spiced with freshly toasted and ground coriander.


For the first time ever, Tripel Threat is also available in 22oz. bottles for takeaway at CBC and at better beer stores throughout the Commonwealth. Our label pays homage to CBC’s first Head Brewer, Darryl Goss, who developed Tripel Threat. Proceeds from bottle sales of Tripel Threat will benefit research for a cure for ALS, also known as Lou Gehrig’s Disease."

Thoughts: Poured a very light straw yellow with shades of light auburn and a two finger seriously white fluffy head that took a few minutes to pop away. There's a ton of carbonation bubbles rising up. A Ton! Though a very light brew, there's no seeing through this one at all. It's hazy as a dusty motorcycle kick-up.

This spicy Belgian yeast is becoming more and more familiar with me over time. Smells a tad bit sour, with some almost tropical fruity tones. Papaya?

That spice is pretty damn amazing. It's like a zinging. Orange peel. Bananas. Not so flowery, and some fine tasting hops. It's hardly bitter at all, in fact, it's actually really sweet with a gentle sour flowing in and out. I'm very pleased that the normal funk associated with Belgian yeast is very low level here. This beer tastes absolutely beautiful. Yeah, I could drink this all day long. There's got to be some of that Belgian Candi Sugar in this... it's just too good.

This beer is a medium-thick, a little bit syrupy and very warming.

I was pretty psyched when I saw this on the shelf about a week or two ago. After the total ownage of their first bottled batch of the Great Pumpkin Ale, I've been waiting eagerly for more of the company's offerings. This very special candy / beer of theirs has finally been bottled in a 22oz Bomber with some kickin' artwork. What's next guys? I'll buy it you just bottle it. 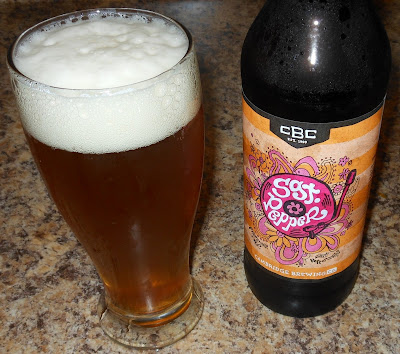 About: "Saison-style ale with Peppercorns. It was twenty years ago today… Well, almost twenty years ago today, as we present to you the first of three special Anniversary Beers in celebration of our upcoming Twentieth Anniversary! It was April Fool’s Day, 1989, when Phil “Brewdaddy” Bannatyne first opened the doors to what would become one of the preeminent breweries in the country. Of course, true to the spirit of the day, it would be another month before the first house-made beers would be available on draft.Sgt. Pepper has been brewed with Pilsner, CaraVienne, and Rye malts, plus Magnum and Spalter hops. But the driving force behind this beer is the contribution from whole peppercorns! Black, Green, White, and Pink Peppercorns were added to the brewkettle, and they provide a noticeable fresh, herbal spiciness to the nose and through the palate. Pink pepper provides a high, floral character mostly as an aromatic, and Green pepper offers an herbal freshness with slight heat. White pepper contributes a subtle earthiness, and Black pepper engages the palate in a lingering, tingling warmth. All combine to accentuate the complexities of our Belgian yeast, and are balanced by crisp malt character with a hint of sweetness."

Thoughts: I'm lovin' the Beatles ref and the Psychedelic Record logo. Very nice work. This beer looks of a dark amber, hints of orange, with a robust stark-white head.

Well, the scent certainly lives up to the name. I'm getting nothing here but Belgian yeast and Pepper! Tons of it. It actually smells pretty damn good, considering that I love pepper and have recently become accustomed to the strange beast that is Belgian yeast. It smells fun and interesting in a funky sort of way.

Belgian yeast is heavy on the nose but light on the tongue even though it's a major part of the flavor here, but man, the pepper in this brew is fucking amazing! Not only does it have a decent kick at the swallow, but it's permeating throughout the overall flavor and then afterwards there's a spiciness of that dust on the tongue and back of the throat that just sizzles a little bit. It's done to perfection and never reaches any extreme point where it becomes undrinkable in any way. Fuckin' loved it. My mouth is filled with a peppery coating and that's they way I like my foods. And beer, is my foods.

Mouth feel is a little light and fluttery, but I think that matches well with the lingering affects of that burning spice that creeps up on you with each gulp!

Well, Cambridge Brewing have done it again. There's not one single beer of theirs that I've tried that I haven't enjoyed tremendously. I guess that would have to place them now as my second favorite brewery, after Southern Tier of course. I cannot wait for their next release! Every time I hit that bottle shop and see one of their striped labels on the New Beers rack, I go a little nuts.