About: "The idea for this beer germinated way back in 2003 when the three guys (Sam from Dogfish, Greg from Stone and Bill from Victory) formed the BUFF alliance (Brewers United for Freedom of Flavor) - a noble endeavor with the goal to highlight the passion and camaraderie of the American craft brew movement. Saison du BUFF was first brewed at Stone and then replicated at each of the other two breweries - same recipe, same ingredients, three different breweries throughout 2010 - and then again in 2012." 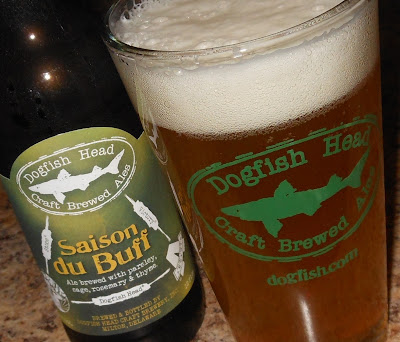 Thoughts: Poured a seriously hazy muted yellow with a slight amber shade and a one finger frothy whiter than white head. Carbonation bubbles are plentyful.

The scent is very zesty at first, like a mix of orange and lemon peel. The yeast in this one presents itself strongly. The herbs all blend very well into the mix here and aren't stand alone or overpowering to one another.

The taste on this one is very fresh and crisp. It's semi-sweet when it first hits the mouth, but a soft coating tingling of tang erupts after the swallow and it later followed by an unoffensive bitterness. There's an earthy wheat flavor to it that's doused with a moderate amount of Belgian tasting yeast. Everything here blends perfectly and comes off as a really enjoyable drinking experience. The last of the bottle gives way to a pleasant aftertaste with a hint of pine and a coating of spice inside the mouth.

I've been recently drinking quite a few Farmhouse Ales and I've gotta say that I'm really digging this style of beer. This one tasted great from the first gulp to the last sip. I will be seeking out more of this style, and perhaps may pick up the Stone version of this that's been collecting a bit of dust at the store.

I was never a big Saison fan, but always liked Saison du Buff. I tried the DFH and Victory releases back in 2010, and I've had the DFH a couple of times this year. I really like this beer, though I can't say which batch is better, if any. The herbs are a nice touch and work really well with the style. I have a bottle in the fridge and one aging.