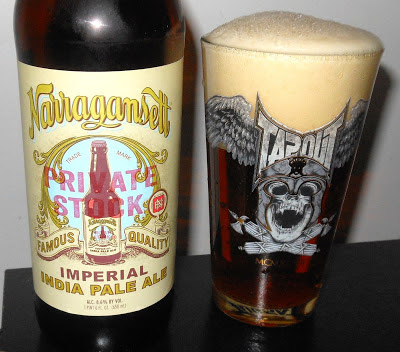 About: "Celebrate ‘Gansett’s storied 122 years in business with the limited-edition Imperial IPA. Released in a 22-ounce bomber bottle, the IPA is chock-full of references to Narragansett’s anniversary. The label is styled after an early Private Stock Ale label used by the company when they began brewing ales in the late 1890s, which underscores ‘Gansett’s heritage as one of the original craft brewers in New England.


Narragansett Imperial IPA was crafted with the best of American and German ingredients, to reflect the great history and legacy behind the brand. We used American 2-row pale malt as the base for this beer, and German Specialty malts to build the back bone and flavor profile of this beer. Summit hops were used for all the kettle hopping, and then we used a mix of Northern Brewers, Hallertau, Tettanager, and Sazz hops at a rate of 2 lb.’s per bbl for our dry hopping."

Poured a rich golden orange color with a slow to build but suddenly bursting slightly off white yellowish head which turned to a pile of mush. Carbonation is running rampant. The beer is really clear.

This beer smells incredible! Tons of citrus, hop oil, zesty and really fresh hops abundantly spiraling upwards into my nostrils turning my brain into a kaleidoscope of hopped up awesomeness.

Taste is very earthy hop, with tons of zest and a lot less sweetness than I thought there would be. Of course, it's very high on the IBU's, so I expected that, but the scent let on a bit more sweetness. Not a problem though. It's got a minor scolding burn to it, like I said tons and tons of raw zest on this one. It's got a decent sweetness to it that comes in up front, but that bitterness just blasts it with a steel gauntlet to the grill. It's also a little dirty tasting, which isn't really a bad thing here. This beer is raw, harsh and rugged. Instant aftertaste is a bit oily. Insane bitterness on the back of the tongue, which is super floral and not at all grassy in any way. Hints of a metallic tinge buzz in and fade off quickly. After a while some vegetable oil and green beans come through, mixed with some pineapple and tropical fruit juice.

It's a heavy medium, but goes down smooth. Be prepared for the after burn though, and stay strong.

For those who give Gansett a hard time or talk trash, this would be a good beer to shove down their gullets. I've enjoyed every one of their beers I've tried. Though I've only reviewed their FEST so far which I absolutely loved! This beer is a very manly addition to their repertoire. By far the bitterest beer I've ever had. Be forewarned.

Email ThisBlogThis!Share to TwitterShare to FacebookShare to Pinterest
What the... Beer, Double IPA, Narragansett