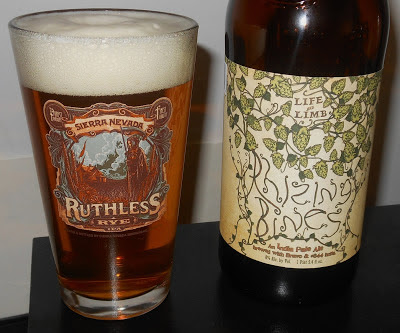 "We had a lot of fun brewing the original dark and roasty Life and Limb in Chico with the Grossmans and Sierra Nevada’s extended family," says Dogfish Head President and Founder Sam Calagione. “We are very proud of the way that beer turned out. Now it’s our turn to repay that hospitality and brew a very hop-centric IPA in Milton with our pals from Chico, incorporating innovative ingredients and techniques from both breweries.”

On the hot side, Rhizing Bines went through Dogfish’s signature continual-hopping process with floral and citrusy Bravo hops. On the cold side, it was dry-hopped with an experimental varietal so new it doesn’t yet have a name, just a number: Hop 644. A component of Sierra Nevada’s aroma-boosting Torpedo system made a pit-stop in Delaware for dry-hopping duty before it headed to Sierra’s new North Carolina brewery.

The label for Rhizing Bines depicts the pairings behind this beer: two hop varietals, two yeast strains (Chico and Doggie), two unique hopping processes and two family-owned breweries. These bonds start at the root - or rhizome - and stretch throughout the mature bines."

Thoughts: Nice hiss off the cap. Color is a rich orange, slightly on the light side and there's a huge white puffy head on top that's lasting forever. The beer itself is very clear.

Smells pretty mild. There's an extremely clean water profile in this. It smells very refreshing too. There's a hint of spice which pops and expands as you breathe in for long periods. I was expecting more of a fierce hop forward brew, but what's actually here isn't bad at all either. It's very earthy and floral, mellow and sweet, citrusy and reminiscent of cold winds. There's a heavy caramel malt which is the most dominating factor here.

This tastes interesting. Very unique. Starts off really tangy, not sour at all, but - and I don't want to say dirty because it's very clean tasting - there's like a strange herbal, grapefruit coughdrop (no menthol) type vibe to it. It's fruity and somewhat bitter, displaying a lot of grapefruit and melon flavors. Maybe a little kiwi too. Not really traditional tasting IPA though, that's for sure. It's got a gentle sting after the swallow, and when you pucker up afterwards that's when the bitterness starts to pound away but it's not overbearing in the least. It's all really an easy drinking, slightly twangy offering. The hop profile in this beer is extremely mellow.

Mouth is a little watery, but it gets a minor foam to it when held for a while. Not really too thin either, and it's not drying at all so that's good. This beer leaves a bit of a raw taste in the mouth. Kinda nutty, but not like peanuts at all, more like macadamia nuts... and a bit like the smell of raw busted open figs.

This is one strange brew. It's got a cool story (bro) to it (check out the video HERE), but for me it's a one time deal. Especially for dat price! Being both a supporter of DFH and especially Sierra Nevada I'd say that this is a must buy at least to try out, but overall I just wasn't that into it. I am however interested to see what's in store for Hop 664 down the road though, and of course, would like to see more collaborations between these two breweries.