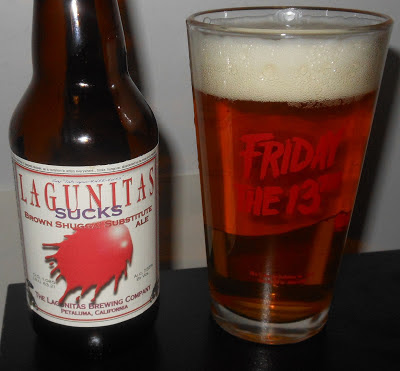 About: "AKA Holiday Ale. This beer was originally brewed in 2011 as a Brown Shugga’ substitute, due to construction-induced capacity issues in our facility. However, we liked it so much it had to make a return trip. Net contents: Ounces and ounces of Malt, Hops, Yeast and water."

Thoughts: SUCKS poured a golden light orange with quite a bit of yellow in there. The head was huge to build but eventually popped down to a sliver that coated the top of the brew evenly. Lots of lacing as is usual with Lagunitas stuff. The beer is clear and clean looking.

This is by far one of the best smelling beers I've ever had the pleasure of holding up to my nose for an hour. It smells like tropical fruit juice candy!!! Absolutely amazing, and the scent is huge too. Nothing is hiding here. It's smells strong, and fresh, and just fucking glorious. Grapefruit and pineapple sexin' it up and oozing that love juice all over the damn place. The dank on it is so sweet that it's sticky and man, if this beer came in a smokable version... you know what I'm sayin'. ;)

Very nice balance on the taste. It's got a smooth as all hell light-malt base that's sweet and soothing while the hops bleed all over the tongue and engulf the mouth with their resiny presence. This beer is a complete blast of flavor from the moment it hits your lips and it just lasts forever, fading out ridiculously slow and never completely. Which is a great thing too, because you won't want this beer to end. It's got a peppered spiciness to it, it's bready, has the perfect amount of sweetness complimented by what could be overwhelming hop strength... but the hop strength is perfect. Just at the edge of being too much, the bitterness falls back at the exact right time and it's just beautiful. It's hazy, dank, and blissful to drink. This has to be one of the best beers I've ever had (good thing I got six and there's more at the stores), and I don't usually come out and say it but I'm giving SUCKS a near perfect beer score.

SUCKS is seriously drinkable, just as it is enjoyable to sip or take small gulps with. I could easily drink about twelve of these and it would be pure ecstasy. It's hard to think of a more accessible near-8% ABV brew from Cali that's easily obtainable and worthwhile. The question I'm asking myself right now is this: If SUCKS is so damn good, and it's a substitute ale for Brown Shugga', then how fucking good is that beer!? I've yet to drink it, so somebody let me know. NOTE: I think I read the other day that this beer has just gone full time. Congrats, SUCKS. Being a substitute sucks, and being a replacement ain't the greatest thing either, but getting a year round release without usurping another brew? That's some popularity. 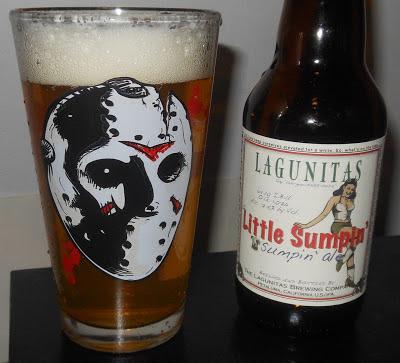 About: "Brewed with 50% Wheat Malt and all the "C" hops. This special ale is something fairly new under the sun. It's got a lot of wheat, it's rich with hops, it finishes dry. We've watched with some amusement as the internet beer rating sites argue over how to classify it. You ever notice how everything has to be today's version of yesterday's whatever. Well, whatever. Sometimes we wonder what the world would be like if everything was perceived for what it is, and now what it reminds you of. The sun would rise everyday as if for the first time, you'd wake as if newly born, you'd see your lover next to you anew, the air would smell like flowers, work would be like the first day back in school, a beer would make your eyes roll back in your head in ecstasy... well, maybe not. Made with: Hops, malt, Hops, Hops, Yearst, Hops, Water, and Hops."

Thoughts: A little Sumpin' Sumpin' huh? Jason Voorhees would not approve! Drank the first four of these while watching Friday the 13'th Part 3 in 3-D with those shitty blue and red glasses that came with the DVD. Talk about a headache. It was pretty shoddy business, but at the beer made it a little better. Too bad I didn't find "an eyeball!!!1" in my beer though.

Nice, crisp aroma. Getting pears in heavy syrup, and a lot of wheat in the background. The beer has a sweet almost cider-like undercurrent to it, but in the forefront and dominating the scent is just sweet, tropical hops. Pineapple, mango, soft apples, and a hint of zest and peels.

Strong flavor here. Tons of hops up front. A dry sweetness implodes, and an extremely gentle bitterness expands throughout the mouth. Pucker up and suck in some air and you'll get a slap of heavier bitter cold and yes, some noticeable alcohol strength. Hops and zest set off a tingling effect on the tongue, it's a little bit stinging, bubbly and bittersweet. But it's a really sweet bittersweet, like butterscotch candy, only an alcoholic version of it. There's a lot of lemony zest all over the back end of this one too. As it warms the flavors intensify and it gets really crisp, tart and sweet, but never rough or too strong.

Mouth feel, well, it kind of numbs the tongue which is weird. It's got a gentle watery texture but the heavy carbonation makes it tough to swallow. This is a solid brew, and probably the best Wheat Beer that I've ever had. For a Pale Ale it sure is hop forward and glorious. I don't like it as much as their "Sucks" brew, but I could still drown in this one. I'd like to try the variations they have on this one, particularly the Wild Ale version, as I'd probably like that one a bit more.

Sucks is a pretty fucking rad brew. Glad to hear it's going into production year round. I only recall drinking Brown Shugga once, and it was delicious. Hopefully it's on the brewing schedule again this year, because I think you'd enjoy it.