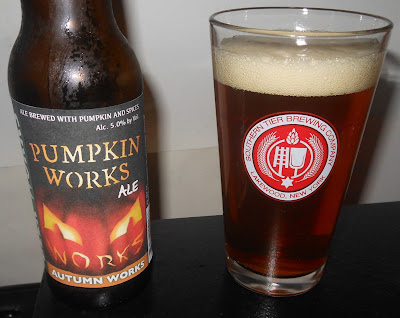 About: "Nothing says fall like pumpkin, spice and everything nice - it’s with that in mind that we release our latest bottled brew: Pumpkin Works Ale, now available! Brewed at Beer Works since 1992, this ale leads with a tantalizing aroma of cinnamon and nutmeg. Made with real pumpkin, this beer is medium bodied with a balance of malt and spice that creates a finish reminiscent of the perfect bite of pumpkin pie. A tasty New England Autumn tradition!"

Thoughts: Totally "stoked" to find two pumpkin beers that I haven't tried before from Beer Works Brewery and Eatery in Lowell, Mass of all fuckin' places. Hey good luck with that guys. This one has the better of the two labels, with a really cool fiery jack-o-lantern face along the bottom. They must really be into the word WORKS too, since it's on this bottle a total of six times(!) including the cap. WTF dudes?

I got something that works too. It's in my pants. But I don't constantly bring it up! Wait a minute... not on purpose at least. Okay okay, so I bring it up on purpose all the time, what the hell do you expect? I'm always over at Day of the Woman and I just can't help it! Pumpkin Works Ale poured a light but bright orange hue with a loud fizzing head that popped away quickly. There was a loud sharp hiss upon opening the bottle and now it seems as if all the forced carbonation has been depleted.

Scent wise we've got your standard pumpkin ale... there's that mild fleshy pumpkin droning over everything, and a whole lotta nutmeg. Sweet malts and cinnamon are in backup mode. It's a mild spiced ale, and it doesn't really scream out pumpkin pie to me.

The taste has that gentle bitterness that pumpkin ales usually bring. It's a bit raw tasting. There's a peppery quality to it as well, kinda smokey like cloves but not really. It's got a strange tartness about it. Not sour, but kinda like a weird squashy fruitiness. Aside from that funky pumpkin, it's a little bit bready and spicy like rye. It tastes a little bit like dirt. Not that there's anything wrong with that, right? I'm not really getting any cinnamon, and it's not drying at all either so there must not be that much spice in here. It's a bit empty feeling with each gulp. It doesn't go down too easily, like the liquid has some weight to it, but overall it's got no real character - aside from that label.

This beer is very middle ground. It's acceptable, but rather forgettable. Did I expect as much? Probably so. Did that really cool artwork draw me in only to ultimately let me down? Story of my fuckin' life g-sta!