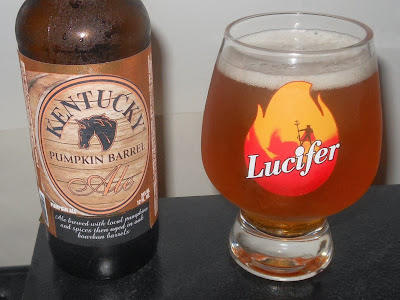 About: "Kentucky Pumpkin Barrel Ale is a barrel-aged ale brewed with Kentucky-sourced pumpkin, richly spiced with cinnamon, nutmeg and allspice. As the ale is aged in fresh bourbon barrels, the sweetness of caramel and vanilla are imparted upon the brew and complement its spicier base. At 10 percent alcohol by volume (ABV), this robust, limited release seasonal makes for a flavorful sipping beer to slowly warm up with as the weather cools. Some retailers will be offering collectible jack-o-lantern snifters along with the ale."

Thoughts: Pretty pissed off that I didn't get one of those jack-o-lantern snifters they made. They look pretty cool. This beer is a lot lighter than I expected for some reason. It's got a decent sized head on it that lasted nearly a minute but fizzled away in its due time. Seeing some carb bubbles rising and the beer is pretty clear

It smells rather nice. It's sweet and you get a nice array of spices, pumpkin and barrel aging in there. Its not overly assertive, but the spices have not been subdued and the vanilla notes really bring out a pumpkin bread cake like quality to the brew. But the scent is far from weak, and it seems as if this brew has been "plucked" at just the right time. Still smells like a pumpkin beer, spices come through nicely and the barrel aging doesn't overpower.

Let's see how it tastes. Strength is the first sensation. Then booze. This shit is strong. Second sip and you know that mild, slightly sour, plain taste of pumpkin that most of the usual suspect pumpkin beers have? This one has that... only it is completely surrounded by the perfect accompaniment of friends here with these barrel notes and a strong sensation of spices that flow throughout. And that's about it. Not bad at all, yet not multifaceted, it is what it is.

If this were an average pumpkin beer I probably wouldn't ever give it a second chance, but I'm not displeased that I decided to grab the four pack instead of grabbing a single.

Email ThisBlogThis!Share to TwitterShare to FacebookShare to Pinterest
What the... Barrel Aged, Pumpkin Beer

I dig the regular Kentucky Bourbon Barrel Ale. I was down in Kentucky on a business trip the first time I had it. Needless to say, it was the best part of the trip. I try to get a bottle or two whenever I see it up here, but I can't say that I've seen the Pumpkin Barrel Ale. It looks pretty similar to the regular bottle, except for the orange cap. It's possible that I just didn't notice it. Maybe I need to take another trip to the beer store.

Yeah, some of these pumpkin ales you've REALLY got to look for, as the bottle art shows no indication at all that they've got pumpkin. When I hit up a shop or go on a beer hunting quest, I check pretty much every single bottle while I scan rows.