Red Hook Our of Your Gourd Pumpkin Porter 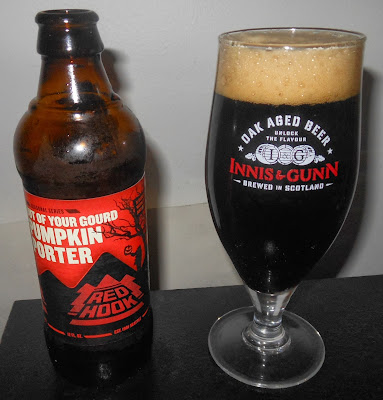 About: "Out of Your Gourd Pumpkin Porter is dark chestnut brown in color and is made with pureed pumpkin. Cinnamon, nutmeg and ginger are added to the whirlpool and maple syrup is added during fermentation. This full-bodied, rich roasty porter makes you want to eat turkey and watch football, or build a bonfire."

Thoughts: Out of Your Gourd poured a very dark brown with a cream colored head full of small bubbles.

It doesn't smell like Tazz's head towel as I had expected, but instead has a rather smooth roasted quality to it with a touch of sweetness. Not getting any hop characteristics... lots of malts though. Smells of the gourd all right. A bit like a boiled pumpkin stew and a little nutty.

Starts off with a very mild tartness, a little bit of spice splashes in then retreats, a little numbing on the tongue, whaft of dry grass, and low droning roasted malts that slowly ride out. It tastes really earthy, and a little dirty. It's got a gentle bitterness to it. There's really not too much going on here. It's got a heavy mineral water type vibe to it on top of the slightly sour mash of that puree, and I don't really know where the maple syrup is but I'm not really getting it. There's perhaps a trace of maple syrup type sweetness, but it's very faint, as are the spices. If this were more spice heavy, particularly with cinnamon and nutmeg, and had a strong dousing of maple syrup it would be a spectacular brew. As it stands right now, it's just a bit plain. Not really terribly lackluster, but just a bit uninspired.

Mouth feel is really thin on this one. Chock this one up as just another pumpkin beer out there on the shelves. You'd think with the ingredients here there would be more to it, especially with the maple syrup. But then again, nobody seems to ever get that part right. Oh well.

Email ThisBlogThis!Share to TwitterShare to FacebookShare to Pinterest
What the... Porter, Pumpkin Beer, Red Hook