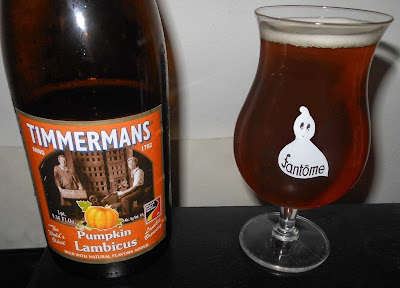 About: "Two traditions are brought together here in a unique complacency, namely an original succulence never tempted before. The result is sublime, liberating a graceful taste tinted by a controlled acidity on the lambic confused with the dry fruity of the pumpkin and the discreet sugar added. By crossing the middle of the mouth appears a taste of brown sugar remembering and accentuating the convivial touch of Halloween."  Great description.

Poured a deep golden orange with a soft white head that faded rather quickly. Carbonation seems a bit heavy, but not overly abundant.

This stuff smells amazing. It's not in your face strong or anything, but it smells like Pumking's little brother or something. There's a ton of cinnamon and pumpkin spice running through this. Very nice.

First gulp and this one already has my seal of approval. It hits you first with a sour kick which lasts all the way through the beer and right after the swallow there's a blast of that pumpkin spice and then a really beautiful, clean malt bill that tastes like liquefied graham crackers. Very tasty for a 4%er. The malts hide of course under the heavy sour notes, but when it falls back on it it's really a perfect accompaniment. There's tons of cinnamon everywhere and I really couldn't have asked for much more in this one.

Mouth feel is a little watery, but slick and leaves a thin oily film. It puffs up a little bit but finished dry and crisp. I do wish this one was a little stronger, just for the hell of it, but as it stands this is one fine tasting pumpkin brew.

Glad to see you were able to procure a bottle of this delicious brew. I felt the same way about the same way about the mouth feel and strength when I first drank it. Then I had another bottle on Thanksgiving, after drinking a few pints of stronger beers and stuffing myself silly with turkey. I can tell you that the lighter body and lower ABV was perfect. It's very impressive that they packed so much flavor and depth into such a "small" beer. I can't wait to try out some of their other brews.