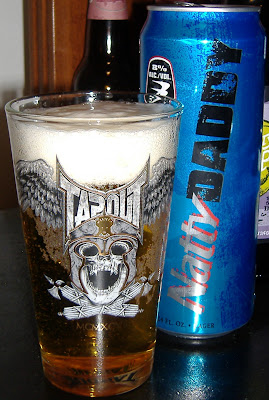 About: "Natural Light is pleased to announce the launch of its newest offering – Natty Daddy! Natty Daddy is an 8% ABV lager brewed with the same all-natural ingredients as Natural Light. Available only in a 24-oz. can! Brewed with: Water, Barley Malt, Cereal Grains, Hops, Yeast"

Thoughts: How could one improve on the "beauty" that is Natural Light (besides in a number of ways)? I don't know, how about make it 8.0%!? Yeah, that'd probably do the trick.

Nat teh Dad poured a very light yellowish amber with a white puffy bubbly head that actually didn't entirely fade away too fast. Five minutes after the pour there's still a sliver of it left on top. The beer is completely transparent and there are massive amounts of carbonation bubbles rising upward.

Whew. Smells like intensely strong corn mash and mildly sour water. Alcohol and a light spiciness tickles the nose. Even though the hops are minimal, they add a little bit of dimension to the scent. Or is that dementia?

First gulp coming up right now and... wow, that's pretty damn smooth! No bite, and not really a lot of flavor after the swallow. Creamed corn mainly. Let's try it a little slower this time: It's malty, spicy, bready, corny, and pretty sweet tasting overall. Slight alcohol haze on the back of the tongue. It's all minimal, but I for one am impressed. I hate Natural Light (well, pretty much all light beers), but this is one big step up from that.

I just gave some to the girl next to me and she says it tastes pretty good! Remarkable. Ah, she's got no taste anyhow. The 8.0% is so well hidden amongst the nice cold tingling flavor. Actually I don't know, but this may taste better than Natural Ice. Which, despite what you may have heard, is actually not that fuckin' easy.

About: "Natural Ice is brewed with a blend of premium American-grown and imported hops and a combination of malt and corn that lends Natural Ice its delicate sweetness. It then undergoes Anheuser-Busch’s exclusive ice-brewing process, which takes the beer to a temperature below freezing and leads to the formation of ice crystals which create its signature rich and smooth taste." 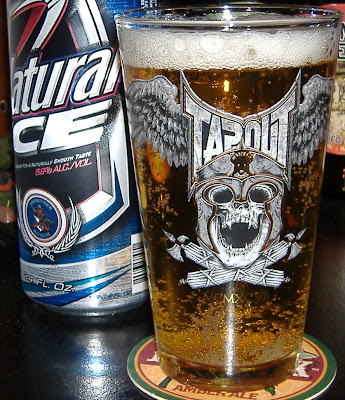 Thoughts: Poured a super light and transparent straw yellow with a practically uniform and bubbly stark white head that about after a minute faded down into nothing at all. Aggresive carbonation bubbles are going completely nuts.

Let's see how it smells. Hmm... it's got quite a strong scent. I wouldn't go as far as to say that it's the most pleasantly scented beer. It smells a bit stale, but fresh at the same time, if that's possible. Uncooked rice and light cream corn mixed. It smells better when it's near frozen.

Little bit of corn taste on the tip of the tongue. It's pretty sweet overall, kinda nice, there's a light malt flow and just a hint of bitter citrus that goes almost unnoticed. The flavor fades out rather quickly after the swallow and leaves little to no aftertaste.

Mouth feel is a little watery and delicately smooth. The swallow tends to be a bit heavy, but that's probably since this beer is meant to be Chugged! Since the smell of this beer pretty much resembles that of a beer you've left out overnight, you're going to want to drink it super ice cold.

Natural Ice gets a horrible rap from pretty much everyone, everywhere. But it is not as all as bad as "they" say. In fact, it's pretty damn good for an "American Adjunct Lager" or a Malt Liquor. I'd go as far as to say that it's probably one of the best tasting beers you'll find in either of these categories hands down. If you're looking for a decent lager at a low price or a quality chaser then look no further than this. Natural Ice is the absolute best tasting brew that you can find at this price, and not only that, but it straight flat-out beats most of the other standard lagers and ice brews flavor-wise that are more expensive.

I like this beer. I like that it's brewed with corn and not rice, unlike Bud. I always thought it special... not special in some bastard child sort of way that most people seem to think it. But ascendingly rather.

Email ThisBlogThis!Share to TwitterShare to FacebookShare to Pinterest
What the... Anheuser Busch, Beer, Lager, Malt Liquor

Now this sounds more like it! An 8% ABV light beer that's only available in 24oz cans. Nor pretense here. Not like that Platinum stuff. I wish this was around years ago, when I use to grab 24oz cans of Molson Ice for 99 cents after hellish days of work at the mall. That shit was rough, and only had 5.6% ABV. Natty Daddy sounds like a more economical way to forget the day through an alcohol induced haze.