Danzig - I Don't Mind The Pain


I don't know what's up with the Edit on the title track or the second track on the CantSpeak single, but they're both just under twenty seconds shorter and neither of the songs are profane so I'm just going to safely assume that they're both Radio Edits to make them both just under the four minute mark. As for the title track of this Single, I Don't Mind The Pain [watch the MUSIC VIDEO, which looks like Danzig stepped on the set of a Jean Rollin film using Dario Argento's old Imbibition Technicolor film stock (kinda)] is an interesting choice for the fourth single. I wouldn't have minded Sadistikal in its place, but this was the tracks destiny I guess (IDMTP is a bit more "catchy"). Hell, they made Little Whip a shirt. The Album Version of Going Down To Die, while a beautiful track, is still just the album version so I'm skipping it. 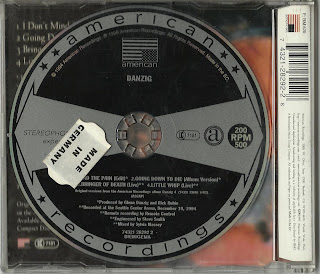 The real treat on this Single is the live track Bringer Of Death [watch a FAN VIDEO set to the film Masque of Red Death]. The sound is crisp, clear and the energy Glenn and the band have here is simply incredible! They're playing this song fast as fuck, but to perfection. Then they slow it down to just light drumming and Eerie Von's bassline, and Glenn starts whispering, telling the crowd to quiet down for a moment: "Shhhhh! I wanna hear the bones break. Shh! Yeah... I wanna hear another skull crush! Hahaha! HAHAHA!!!" Oh and that laugh he gives after he says that is diabolical let me tell you. I think this live version is even better than the one on the album.
Little Whip starts off, as usual, slowly, but Danzig and Co unleash a furious, blasting power during the finale of the song that you can really get into and feel. These two live tracks are outstanding, and I'm sure that Glenn thought so himself because in 2001 he released six tracks from his '94 live show in Seattle on the Double-Disc Live album "Live On The Black Hand Side". The others from that set are Killer Wolf, Going Down To Die, Stalker Song & Long Way Back From Hell. I find this live version of Bringer Of Death to be better than the one they put on the original album. This Single is only recommended for collectors, as (like I just said) three of the songs have been released on readily available albums and the title track is a shortened Radio Edit. Unless you're really into Radio Edits, or something...
Laid to Unrest by DrunkethWizerd

Email ThisBlogThis!Share to TwitterShare to FacebookShare to Pinterest
What the... CDs, Danzig, Metal, Sounds