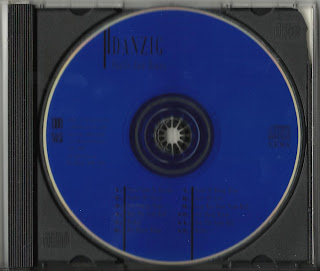 "It's too fucking hot for a shirt! This is Snakes Of Christ!" This show was recorded during the same tour (lets say about a month after) as the "Power Of The Dark Side" CD that I just wrote about. Luckily this sounds a lot better than the other one. There's some crackling, a lot of close-up crowd noise during the quiet spots and a bit of insanity here and there... but fortunately they fixed that distortion problem from the previous shows. This is a damn fine intro set, and if you're into Danzig's Live performances then there's really no reason to keep you from getting this provided you've got some extra cash. They played a few songs they don't normally play (Left Hand Black, for instance) and the sound, while not great, is acceptable and loud during both vocals and instruments.
I don't know what the fuck happened with the last two tracks. Apparently the guy who "mastered" this Bootleg either fucked up or thought that it would be a funny joke to speed up the sound on 'em? Or maybe this "company" RTW didn't think there was enough room on the CD so these two tracks had to become smaller files, who fuckin' knows. Does it work that way? I don't know. It's not chipmunk sound or anything, but halfway there... and rendered totally worthless. Perhaps this Bootleg company just wanted their CD to finish as the time 51:50. That's cool at least, but I don't think so. Maybe they thought How The Gods Kill lasted too long. They sure as shit though must have been insane to fuck with shit this way. IDIOTS!
Strange that they note on the CD back cover "Intro / Come To Getcha", just like Power Of The Dark Side. Sure, POTDS had problems with the last set, but this one is pretty much the solution to that problem, so why the inclusion of the two famous tracks only to distort them? Guess we'll never fuckin' know... right?
Laid to Unrest by DrunkethWizerd

Email ThisBlogThis!Share to TwitterShare to FacebookShare to Pinterest
What the... Bootleg, CDs, Danzig, Metal