About: "Malts: Pale 2-row, Crystal, Munich, and Malted Wheat / Hops: Magnum, Boadicea and Sovereign. Why does the world need another IPA? Because this one ain't like them others. We use hops of a different color, earthy and herbal, well-balanced by bready malt. The result? An English-style IPA that separates itself from the ubiquitous bunch. Cartloads of bitter monkeys flinging wasteful amounts of bananas into the jungle ...we're so done with that." 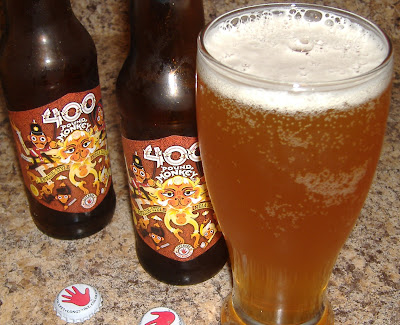 Thoughts: Poured a very light amber orange with a small bubbly white head that left a light film around the top of the glass.

Smells of sweet floral hops, and it's pretty damn malty for an IPA too. Strange.

Initial taste is hops. There's orange peel and it's a little grassy. The malts flow through shortly afterwards. So basically it tastes just like it smells. Well... it's a good tasting brew. There's a little sour bite towards the end, but it's very well balanced altogether. Aside from that, there doesn't seem to be much going for it. It's not tasting good enough for me to fawn over it, and it's not horrible in any way for me to dismiss it.

Mouth is light and fizzy. Goes down smooth enough.

Finishes really dry. 400 Pound Monkey is a very approachable English style IPA with pretty artwork that will give some non-adventurous couples on a date night in something easy to go along with their P.F. Chang's or not delivery DiGiorno's. According to BeerNews.org this beer is meant to bring the IPA back to a time where it was "sessionable and balanced." This is my first brew from Left Hand (I was intrigued by the artwork obviously), and it may not be my last, but I don't plan on going out and buying a six pack of this.

Email ThisBlogThis!Share to TwitterShare to FacebookShare to Pinterest
What the... Beer, IPA, Left Hand

Haven't tried Left Hand's 400 Pound Monkey, but I've seen it at the beer distributor. I've had their Milk Stout, which is pretty good.