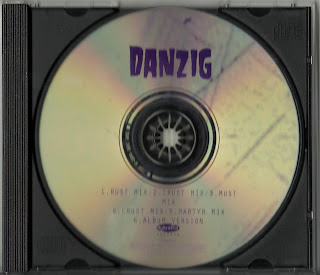 As bad as Danzig 5: BlackAciDevil is, especially when compared to Glenn's previous works, at least the music that he himself produced on that album isn't as horrid as these stupid-named Remixes are. The "Rust Mix" does its best job of covering Glenn's voice in distorted layers of shit until you can't even hear him. Some people have complained about this on albums 6 and onward, but on 5 he's loud and clear! Was this Remix a foreshadowing of things (or complaints) to come? The "Trust Mix" is essentially the "Rust Mix" but without the vocals at all! I guess covering 'em up wasn't enough. Heh. J.G.Thirlwell may have a somewhat impressive resume, and I own a few other CD's that he's done Remix work on, but this shit is uninspired and tired.
Despite the lack of vocals on the "Must Mix" (aside from one yell of "Sacrifice"), this seems to be the only track that the guy gave a fuck about. It feels like it could be in a Metroid game, sounds really nothing like the title track, and is weird enough to be considered OK. Joseph Bishara's one entry here sounds like the mutated child of the only good Thirlwell track and Danzig's far superior Original Version [Watch the MUSIC VIDEO]. This is the other OK track on this Single. If in fact this single consisted of the Original Version, the "Must Mix" and the "Martyr Mix" it would probably be a pretty decent release. Seeing as how Bishara did some work on one of the Mortal Kombat sequels and Heavy Metal: FAKK 2, I would have liked if he had another track on this to show off what else he could do.
This is no EP. It's a Single. This is the original release and not the Reissue with three bonus remix tracks. I have no desire to pick up the Reissue as even owning this dics displeases the hell out of me. The Reissue's cover art is actually well done, using the full picture that in this case has been blown up from eyebrows to chin and looks like total shit of a cover art job. The back of this atrocity looks like someone just straight ripped off an old NIN remix cd. I expect that kind of lazy shit from Trent and his art guys, but at least they sometimes have interesting backgrounds. This just looks like blurry, scratchy purple-ish trash. For shame. And the coverart isn't even a folded piece of paper either, it's just a straight double-sided insert job where the inner art is what's on the back cover, without the tracklist or other wording. Avoid!
Laid to Unrest by DrunkethWizerd

Email ThisBlogThis!Share to TwitterShare to FacebookShare to Pinterest
What the... CDs, Danzig, Industrial, Sounds