Danzig - The Power Of The Dark Side 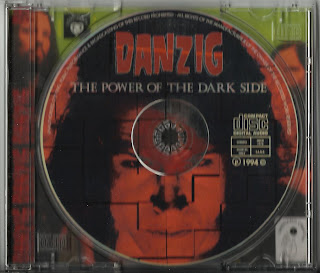 An interesting Bootleg I got here from "Metal Crash", bought it when I was probably fifteen and just found it to be killer! I've seen way worse Bootlegs in terms of quality, spelling errors, incorrect song titles (some of 'em just guess - I'll show you what I mean later with that)... but this one has to be one of the very Best out there! First off, take a look at that cover. That is one badass shot that they used! (Now, take a look at Glenn's 'final nail in the bootleg coffin' cover for "Live On The Black Hand Side", yeah, what's with the huge dirty looking hand? Who fuckin' designed that!? Uhg!) They got a clear inside tray with a cool group photo underneath, a picture disc, and a f'n eight page booklet w/ pics! Okay, so they spelt his name wrong... Eerie Von's got two E's and Glenn's got two N's, I guess it could be an honest mistake. All songs listed are correct except for "Come To Getcha" which is actually Brand New God but this Bootleg was released some four months before 4p so that's understandable.
The first two tracks are listed as being recorded Live in the USA in 1993. How The Gods Kill was actually recorded during Danzig's most famous Live Date on Halloween in Irvine Meadows, California in 1992. Around this time they were working on their one and only EP to date, Thrall-Demonsweatlive, and compiled a few different video recordings of their song Mother to make a Music Video titled Mother '93 [Watch the MUSIC VIDEO]. They canned in audience recordings over their original song and set it to the video, and the results were absolutely explosive! The second track on this Bootleg is that recording. Their performance of HTGK from Irvine '92 has to be one of the best I've heard. Aside from watching the official Music Video [Uhhh, watch the MUSIC VIDEO] for the track, this Live performance is my favorite. [Note: Yahoo's got better quality, but the vid is CUT so here's the YTube one with teh boobies.]
The next six tracks, 3-8, recorded in not LA California, but rather The Palace Theater in Hollywood in 1989 are the real treasures found on this disc. This recording came a year before Lucifuge was released and before they start Am I Demon the band does this strange introduction that develops into the Her Black Wings riff before falling back and settling into the named track. These six tracks are stupendous quality, not only audio-wise but also in terms of their electric performances. John is shredding, Glenn is top form, Chuck is f'n going off and Eerie's fingers are bleeding! It's really cool to hear Not Of This World and especially Invocation on a Live CD. These fuckers WENT OFF and luckily it was captured on tape and preserved, because this is one show that when you listen to it, you're really going to wish you were there!
And then there's the next nine tracks from Buffalo, New York in 1994. Man, does the sound quality on this one suck. Wait, don't get me wrong, I've heard worse, a LOT worse than this actually... but compared to the first half of this Bootleg, this next set is pretty weak. If it were on its own, and you hadn't actually listened to the previous eight tracks, it probably wouldn't sound as bad (you know what I'm saying?). Hey, at least Now the disc feels like an actual Bootleg, right? There may have been problems with the set-up that day though, as there's a bit more squealing amp distortion than usual. So maybe their grips needed to get their shit together. Danzig's set list flows though, and it's cool to hear Brand New God then Snakes Of Christ then It's Coming Down back to back to back like that. Glenn definitely had a plan with that set list.
Despite the muffled sound of this last part, the show is energetic and the crowd is still as wild as ever. You can hear a lot of people talking to eachother durin HTGK so I wonder where the camera and/or recorder was located. I don't think Glenn is moving too much during this song, but now and then the distortion still hits hard. This set isn't their best performance, nor their best sounding, but its got a few moments of greatness. Maybe it's because they were playing right before Metallica at the time and all the roadies were fucked up. The band sounded great, but the situation was pure shite. All in all I'd say that this Bootleg CD is on par and even better than some of the Official releases. There's some classic shit here, and a great almost-shitty sounding show to end it all. Recommended.
Laid to Unrest by DrunkethWizerd

Email ThisBlogThis!Share to TwitterShare to FacebookShare to Pinterest
What the... Bootleg, CDs, Danzig, Metal, Sounds