About: "Ingredients: Tons and tons of Barley, bountiful Hops, Water and Belgian Yeast. When our illustrious brewing team spiked a few barrels of the Stone Old Guardian Barley Wine with our Belgian yeast strain last year, we absolutely loved it. So much, in fact, that we knew we needed an excuse to make more. So, in our unending quest to constantly challenge the status quo (even our own), we came up with Odd Beers for Odd Years, a program to release odd beers – e.g. Stone Old Guardian BELGO Barley Wine – in odd years (2011, 2013, 2015…). It was met with a bit of resistance (to say the least) since we weren’t originally offering the traditional Old Guardian alongside it, but we’ve mended our ways and decided to make both. You’re welcome." 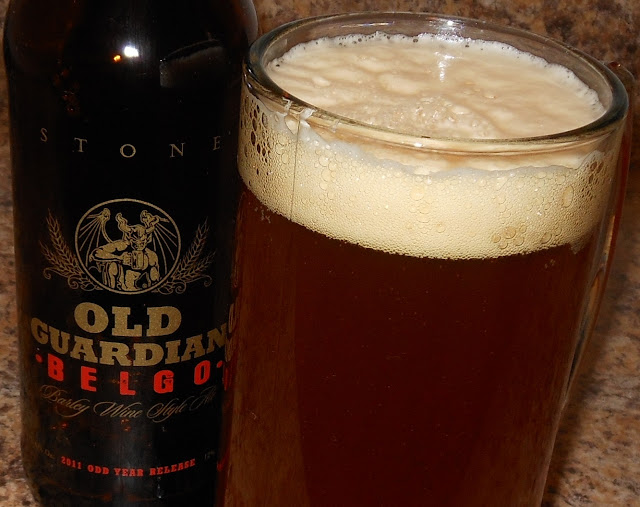 Thoughts: Old Guardian BELGO poured a very beautiful, deep and rich orange-red with a two-finger cream colored head that was full of small bubbles and topped with a layer of froth. The brew is pretty hazy with a lot of carbonation bubbles rising up, and about a galaxy worth of tiny particle flakes floating about.

It's been a while since I smelled something like this. I'm really looking forward to drinking it! It's got that classic strong barleywine scent... it smells dangerously sweet, a little bit spiced, there's essence of dark fruits, and of course that gnarly barley. The Belgian yeast doesn't present itself at first, but instead lingers towards the back and hides out. I wonder how it will present itself in the taste. Let's see.

The taste hits hard and strong with a jab of intense and cloudy booze sting, slowly calms into a peppery tone from the hops and then, out of nowhere, after the swallow there's this really nice fruity burst that erupts. I didn't expect that but it kind of made me feel giggly. Aftertaste after the first few gulps is a very, very light dust of grass. As I keep on drinking that immediate sweetness is still there and the taste is pretty damn good. One third of the way through and as I stop to take short pauses, the taste of that Belgian yeast starts to slowly creep in and intensify with each gulp. Interesting. I couldn't smell it or taste it at first, but I guess its characteristics are so embedded in this strange way that it grows and expands.

Mouth feel is pretty thick. It's really syrupy and coating. This is an interesting barleywine. I believe that it's the first that I've ever had with Belgian yeast. It's a solid brew, but it is however, a strange one. That being said, the yeast is pretty mellow and luckily doesn't overpower the rest of the taste. It's background for the most part and later after warming, even though it becomes more apparent, it still lays low and that sweetness always shines the brightest. That, and the booze! I forgot that this was 12% until half way through when I looked at the bottle again. I'll be searching out everything Barleywine to find the best out there, I think I owe it to myself. Can Southern Tier Backburner ever be topped? Will I ever stop thinking about Berkshire's Holidale? Guess I'll find out, someday. There's really nothing I didn't like about this one though. It suits me well. Guess I'm becoming more accustomed to that Belgian yeast.

Email ThisBlogThis!Share to TwitterShare to FacebookShare to Pinterest
What the... Barleywine, California Beer, Stone