About: "Legend has it that barrels of sahti were found on sunken Viking ships off the coast of Norway.  This ancient Nordic ale took root in Finland becoming one of the oldest continuously brewed styles. For us, the legend of this sahti goes way beyond its Nordic roots.  It’s been a labor of love, or at one time some may have said hopeless pursuit, among a few of our brewers.  For almost 8 years we’ve been tinkering with it, from experimenting with its traditional, if rudimentary, technique of brewing with full juniper branches to trying variations of berries, malts, and rye.  We kept searching for just the right combination of ingredients and process to capture this brew’s distinctive character of woodsy earthiness, citrus, and spice.  After all of those trials, we’re excited to finally get to share this unique brew outside of our brewery. Malts: Samuel Adams 2-Row Pale Malt Blend, Rye, Special B, and Aromatic Malt / Hops: Hallertau Mittelfrueh Noble hops / Yeast Strain: Samuel Adams Ale Yeast / Special Ingredients: Juniper berries." 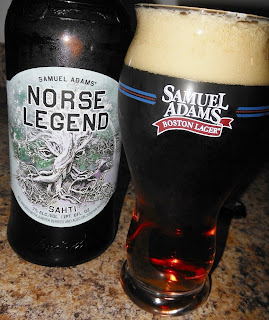 Thoughts: Norse Legend poured a ruby like red color and had a dark yellowish creamy head. The beer is pretty transparent, though not completely, and isn't cloudy at all.

Scent is sweet and spicy. I'm mostly getting the rye. Juniper berry scent is laying real low in this one, which is a damn shame. While I'm not really a gin drinker, and haven't had the stuff in over ten years and even then didn't enjoy the stuff, I would have liked this beer to have more of a scent to it than what it does. Overall the smell is good, but it's pretty light and hard to get.

One big gulp to start off the night. First sensation is that Sam Adams yeast and malt which is very recognizable, followed by a calm tartness from those juniper berries and the end of it is a crisp citrus hop blend. My initial thought is that doesn't hold a candle to the greatness that is Dogfish Head's Sahti... but my second thought is that this beer is actually probably one of Samuel Adams' better brews out there. As I start to drink it faster, the merging of the senses build and a cloudy lingering of this brew's true essence remains behind. It definitely tastes of a Sam Adams brew, but the addition this time around of these special ingredients actually works out quite well. It's more woodsy tasting than it is herbal, and the mild citrus at the end is on the sweet side and doesn't get grassy at all which is nice. It's not sour, but sweet and tart... and when I said mild before, the beer as a whole is pretty mild really.

Mouth feel is a cold, watery medium with a gentle building fizz around the back.

This sweet, malty, tangy and somewhat spicy brew is an above average release from Sam Adams. It could be better yes, if these flavors were amplified (Isn't that always the case?). With this brewery though, I'll be pleased with what I get, if in the rare case I actually enjoy the beer. Their track record is pretty rough stuff with me, but they've got some gems hidden around here and there. This is my second ever Sahti Ale, and while I don't know how this would rank amongst the style, be it mediocre or not, to me it's one of Sam Adams' better tasting- if still rather unremarkable - products.