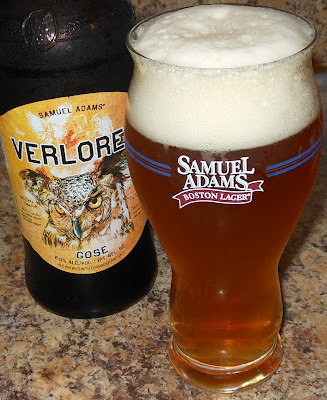 About: "This unfiltered brew begins with a base of 50-60% malted and unmalted wheat for a crisp cereal note that’s light and refreshing.  The addition of lactic acid gives the beer a soft almost creamy taste and just a hint of acidity.  The addition of salt rounds out these flavors, providing a slight mineral quality while ground coriander gives the beer a peppery spice and citric notes. Malts: Samuel Adams two-row pale malt blend, Munich, malted and unmalted wheat / Hops: Saaz Noble Hops / Yeast Strain: Samuel Adams Ale Yeast / Special Ingredients: Coriander and Salt."


Thoughts: Verloren poured a pretty standard light-amber golden beer hue that turned out to be pretty hazy. The white head was fairly robust and showed a lot of staying power at a half-inch of small bubbles and lacy foam around the top of the glass.

The smell is very nice on this one. Very fragrant with a touch of spice... there's a lot of heavy malt in this one. Not really caramel, but very candy like.

First sip and I'll admit I'm a bit impressed. It's flavorful and fun, and those are the first thoughts that came to mind. Coriander and Salt are definitely the shining stars here, adding that touch of unexpected surprise and enjoyment to a wheat ale base. There's a zing to it, a little bit of a flavor blast that hits you, and then as it dies down it does so tremendously well. Not too much of a tang, but it's there and just the right amount. If I had to describe the fruity notes, I'd say tangerine. It's not sour at all, but there's a sweet and strange citrus quality to it. The saltiness really starts to come through around the last end of the bottle. I can feel it in the back of my tongue and throat. It's got a creeping mineral feel about it that blends perfectly well with the citrus and light spice. No complaints here, aside from it's got me licking my lips like a crackhead.

I went into this beer expecting nothing aside from the cool Owl artwork and the mention of salt. From the taste you can tell that this is a Sam Adams brew. Standard ingredients are all there and if you're used to it, it shows and it's not terribly exhilarating. The aftertaste doesn't fare as well as the first sip, gulps and initial taste, but it's not unpleasant by any means. Taking another gulp however, simply refreshes everything and even burping it up is a little exciting experience in itself. I'd say that this is one of their better one-offs falling third under Griffin's Bow and Tasman Red. While I had qualms with the other brews in this series aside from those two, this one seems to be pleasing to all of my senses. Something about this one really makes me miss those pumpkin ales. Maybe that's why I liked it so much? I taste a bit of Halloween in it.