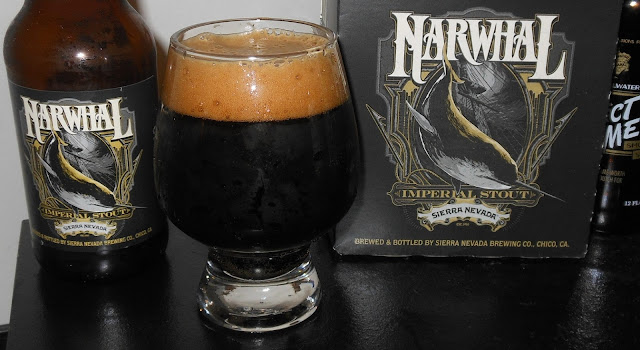 About: "A malt-forward monster, highlighting the depths of malt flavor. Narwhal Imperial Stout is inspired by the mysterious creature that thrives in deepest fathoms of the frigid Arctic Ocean. Featuring incredible depth of malt flavor, rich with notes of espresso, baker's cocoa, roasted grain and a light hint of smoke, Narwhal is a massive malt-forward monster. Aggressive but refined with a velvety smooth body and decadent finish, Narwhal will age in the bottle for years to come. Yeast: Ale / Bittering Hops: Magnum and Challenger / Aroma Hops: Challenger / Malts: 2-Row Pale, Caramel and Chocolate, Honey, Carafa and Roasted Barley."

Thoughts: NarwhaL poured a super-dense total midnight black right out of the bottle with a half finger beautiful, dark milk chocolate head.

This fucking beer smells outstanding! The first thing I get is syrup. And it hits hard too! Nothing subtle about this one. Heavy thick sludge like syrup in the scent. Loads of malt, Hershey's chocolate bars, some absurdly sweet coffee in the back, and a little bit of the earth left behind.

The taste is immense! Rich dark malts come through first, tons of sweetness, smoke, and a stinging boozy haze. A lot of that coffee flows through right after that once you breathe in, followed by an instant grassy aftertaste. This thing is blazing with roasted malts. There's a fair amount of peppery spice here too. Also, some hidden dark fruit type stuff going on far in the background if you just let your mind wander a bit while settling this in your mouth. It starts off with a sting, and while it slowly mellows, it doesn't really mellow at all. This stuff is boisterous, loud and hits like a brick. It's got a far-off candy like quality to it, especially as it warms, but for the most part it's not overly done in any one direction. The tastes here all blend perfectly and mingle well together. You can pick apart each and every feature, and yet, nothing is dominating here... only the severe blast of flavor.

This Imperial Stout has a pretty significant hop profile, but it's not too bitter for me. Personally I think the balance has been perfectly done for for such a hop driven company. There's a lot of sweetness here, and just the right amount of bitterness. It could use a few ghost chilies in the mix, but I'm not really complaining as I can add that myself. Thinking of mixing this with 1050 just for the fuck of it...

Email ThisBlogThis!Share to TwitterShare to FacebookShare to Pinterest
What the... California Beer, Imperial Stout, Sierra Nevada

Narwhal!!! Knowing SN, I'm sure this is a hoppy stout. But, I'm willing to give it a shot. If there's one brewery that I trust with hopping the shit out of beers that aren't necessarily supposed to be that hoppy, it's SN.

Funny that you mentioned ghost peppers. I'm aging an imperial Chocolate Stout that was finished with ghost peppers. It might be a few months before it's ready, but I'll send you a couple bottles.

That sound fan-fuckin'-tastic! Ghost chilies are my favorite.

Damn! That bottle is epic!

I'll have to keep my eyes out for this one. Wonder if we'll get it here in Michigan.