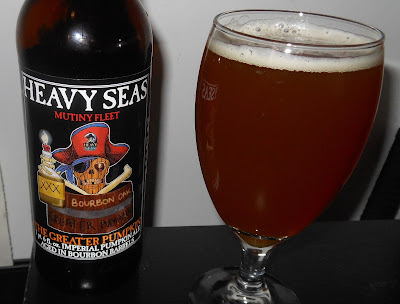 About: "Great Pumpkin draws much of its flavor from a mixture of spices: nutmeg, cinnamon, clove, and allspice. Dark brown sugar adds color and some dryness to the spicy, malt-forward ale. The addition of the spices and pumpkin in the kettle makes this brew opaque.

The Great’ER Pumpkin, the bourbon barrel-aged version of The Great Pumpkin. Our brewers wrangled fresh, just-emptied bourbon barrels from A. Smith Bowman Distillery in Virginia, then fill them with The Great Pumpkin, and let the beer age inside the barrel for three weeks - bringing out vanilla and oak notes. The Great’ER Pumpkin will come out in very limited supply, in bottles and on draft."

Thoughts: Light hiss from the cap. Very slow to form head that surprisingly lasted almost a full minute. Head is a semi-transparent white. This beer is incredibly cloudy and so dense that it's impenetrable by light and/or the human eye. Color is a somewhat light auburn orange.

The scent is very mild. I'm getting some honey, circus peanuts and some bourbon way way off in the background. Getting a little bit of cinnamon, nutmeg and marshmallow... all still very hard to smell.

On first gulp, I'm hit with the heat! While this beer may be real light on the scent, it blasts straight away in the mouth. A fierce black pepper burst, a fiery haze of booze and a sting from that cinnamon all rain down upon my tongue like pounding fists of flavor. How's the flavor taste exactly? Like harsh, boozy and very buttery cookies with slightly burnt bottoms and loads of sugar as well as brown sugar. It starts off boozy and sweet, then a deep rooted bitterness comes forward for a few moments, before retreating and letting that booze mildly ride out. It's interesting, and tastes really good once it warms. It's not orgasm-inducingly immense or anything, but it's got a velvety like taste to it and it's got aspects of what I like about my (barrel aged) beers:  Great in winter, Spiced, Boozy and Strong, and it's Raw Sugary Adult Candy. Pumking gets the TKO for the win near the end of Round 2, but this one is still fun stuff.

Haven't tried the original version this year, but more than likely I prefer it to this version. It's still in shops though, so there's a chance I may just pick up this years version and see. Mouth feel is a heavy medium, tickling with spices, soft and gentle on the fluff and extremely minimal on the bubbles due to the barrel aging.

Email ThisBlogThis!Share to TwitterShare to FacebookShare to Pinterest
What the... Barrel Aged, Heavy Seas, Pumpkin Beer