It's very sad news that a few days ago Jean Rollin passed away. His films are some of my absolute favorites and many of them are exquisite gems. For a couple years a while back, Encore Films in association with Redemption Europe, issued seven of Rollin's films in Deluxe editions (five of them 3-Discs, two of them 2-Discs) with slipcovers and bonus booklets featuring unreleased photos and essays by Rollin. In this review: Requiem For A Vampire, the second release in the series.
﻿
﻿Two beautiful young women (who are dressed as clowns) are on the run from people who don't at all seem to be police, but rather someone that they may have ripped off. As the cars speed along, a shootout commences and their unnamed male companion is shot. After they escape the chase via a clever turn through the trees, they wait a while and then light his dead ass up along with the car. Who these girls are and what they have done, we may never know. An interesting introduction to say the least, and cue title card.
﻿﻿ 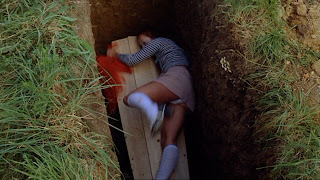 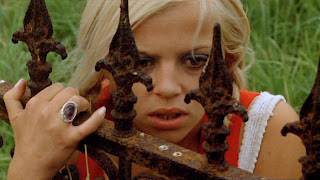 The two of them then travel by foot through the french countryside, doing their best to avoid being seen by any passing cars. They come across a green lake where they wash off their make-up while sparkly piano keys play in the background. After changing clothes in an abandoned building, they enter some sort of stone garage and steal some poor bastard's motorcycle. They then happen upon the ice cream man a man in a food truck, and the blond girl proceeds to entice the guy by slowly walking to and fro in front of him. Her flirting does the trick (I mean, just look at this chick - she's gorgeous, tiny and blond) and he chases her into the woods. Meanwhile, the brunette with pigtails (yum) runs inside his truck to steal french fries(!). After allowing the horny man to fondle her a bit, Blondie thwarts his attempted rape by pushing him off her and hiding behind a tree. That was easy. The two girls meet up again, giggle while eating the chips, and then they're off at an astounding ten miles per hour.

Some time later they ditch the bike, grab their clown outfits and start walking again. When they hear some guy's voices, they hurry through an old creaky cemetery gate to hide. As it's beginning to get cold out, they use their outfits as blankets and lay inside a fenced area. But as howls, creepy cat sounds and the men's voices grow louder, they make a run for it... only for Brownie to stumble into an open grave, right on top of a wooden casket! As she lays there knocked out, the two men approach the open grave with shovels and of course these dumb asses don't notice her in there. They begin to shovel dirt on her tender flesh as the blond one looks on, horrified! [The camera view from inside the grave even shows this guy looking straight down upon the casket, but still he doesn't see her.] The gravediggers stop to drink some wine together and then decide to leave the work for the next day, as it's getting dark and you just "never know" when it comes to spirits. We then learn the name of the brunette as her friend comes to her aid and yells out, "Michelle!" 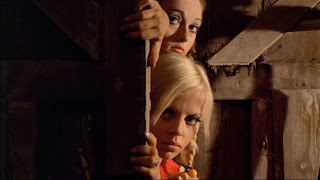 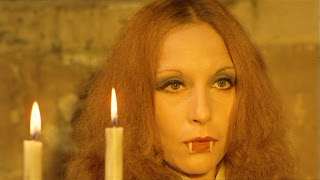 ﻿Now back in their clown clothes for warmth, they wander through the graveyard and after being startled by the sight of bats, they get the fuck out of there. Running through the woods, they're horrified once again as they run face first into more bats! These fuckin' things are all over the place. For a moment they sort of become entranced as they watch the bats moving around in the trees. The two girls then do this slow, zombie-like walk out from the woods and  you don't notice it at first, but as the camera zooms in you see the bats have attached themselves to their necks! The bats lead the girls to a sweet looking castle, and they decide(?) to explore it. Michelle and Blondie make their way up a spiral stairway adorned with skulls and into a strange room with a furry bed, and then they get butt naked! Alright, baby. They start making out in tasteful, soft focus; grabbing each other's bums and rubbing together until they hear a another strange noise.

Now nearly fully clothed again and with their guns drawn, they go wandering around the castle... and you just know that they're going to run into a decomposing corpse with a melted face! I mean, shit just happens that way. Yeah, so they're terrified and Blondie starts poppin' off shots randomly into the air before Shell pulls her crazy ass out of there. Oh, and there seems to be arms just sticking out of holes in the castle for some reason. It's weird as shit. Upon hearing organ music (of course), they quietly creep into a room and to their surprise find skeletons in robes surrounding an alter. The strawberry blond woman in the black cape playing the organ slowly grabs her candelabra and turns around quickly, revealing herself to be a vampire! 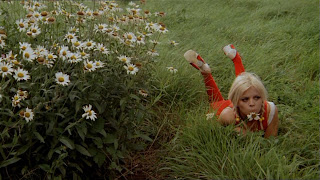 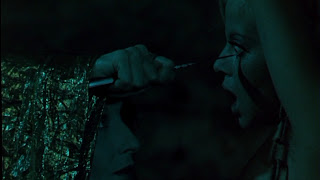 The movie is just now nearing the middle mark, and if you hadn't had already been told by the title, you may not have known that it was a vampire film. Aside from the bats on the neck that is. The portion of the film I have just described is Rollin's initial draft of the script. It was at this point in writing that he stopped and re-read what he had written, only to find that he had no dialogue whatsoever. Luckily, for the first half of the film, he didn't re-write much dialogue into it. I personally love the fact that about 90% of this movie is "silent". It really works. Much of the film is simply pure visual splendor anyhow, and it's pretty self explanatory. Even with the confusing ending, where much of the film's dialogue occurred, the words didn't really help things much in terms of rationalization.

Rollin filled this beautiful film with all sorts of great panning scenes. For instance when the Count opens his velvet red lined cape and there are two bats hidden on each side. The next shot is the two girl's faces from the chin up, and the camera slowly pans down to show that the bats are now clinging to their necks. Or another great scene where Blondie is laying on her belly beside a bed of flowers. When the camera pans out, slowly once again, you see that she's surrounded by tombstones. Simply wonderful! There's also fun moments when the girls try to escape out of the castle, every way they decide to run eventually leads them right back to the front gate. There's a bit of padding around the middle point in the castle's basement where a few women that are chained up are molested by the vampire's henchmen. It's soft core nonsense but doesn't horribly detract from the rest of the film. The scene was saved with a vampire bat on the vagina shot that fucking not only blew my mind but made me clap my hands and bow down before the tele!

Rollin shot alternate scenes where the nude girls are clothed, just for certain markets (and the French Censors) and that alone is brilliant thinking. Of course, those alternate scenes are presented here as extras on the third disc with optional audio commentary by Rollin himself. It's a very nice touch. There are various interviews and a slideshow, but the main draw to this aside from the film itself would have to be the packaging. This 3-Disc Digipak with Slipcover is just fucking beautiful and I display it prominently in my collection, along side the others. The picture is Anamorphic and Progressive with a bit of digital clustering abound. The film print is gorgeous with speckles, a few scratchy lines and some blotches now and then. I counted one scene of a man walking around the castle that was darker and looked vastly different from the rest, but it's good they put it back in (if it was ever removed). Also, the short moment where the vampire lady appears on the top of the stairway outdoors. Those were the two dirtiest and seemingly not-remastered parts of the print.

Requiem pour un Vampire has always been my favorite Rollin film. In his written interview he says that he really took control on this production and didn't let anyone question his film-making intentions. I say, Bravo! And I award his end result a perfect film score of 10/10. Some may think I'm insane, but I know so.

Email ThisBlogThis!Share to TwitterShare to FacebookShare to Pinterest
What the... Babes, Film Review, Horror, Jean Rollin, Movies, Requiem For A Vampire, Vampires

I must see this movie!
Love the screen caps, especially the first! <3 bats!