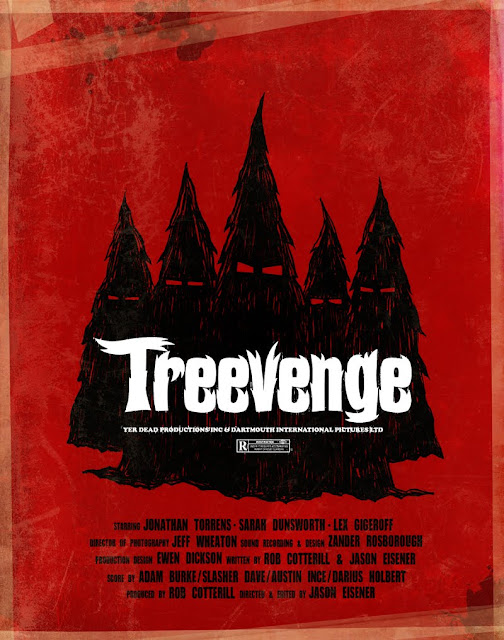 When I first saw the trailer for Treevenge last December, I damn near shit my pants when [BLACKENED SPOILER] the tree grabbed that little girl. [/SPOILER] It was loud as hell, very unexpected and after the initial shock, totally sweet! I must have laughed for five minutes. By this time, you've most likely seen the short film either online of if you were lucky and adventurous, during a festival run or a one day showing at some burnout driven theater. I've decided to pay my respect to the misunderstood and relentlessly violent forest creatures in this very post.

The beautiful main theme from Cannibal Holocaust plays as the crane shot glides over a landscape of snow covered trees. Seemingly out of nowhere, burly men arrive carrying axes, chainsaws and weedwhackers. As they scream with excitement before the maniacal devastation, a small baby tree shudders in fear. After many of the trees are hacked down, one of the men stomps the little tree to death. As the rest of the trees are gathered up to be sold, they (the trees) witness the horrors of man as many of them are unnecessarily harmful and mean spirited towards pine. The tree abuse doesn't end there as then they are needlessly screwed into christmas stands and then humiliated with decorations. While there are those who simply abhor trees, even the ones who claim to love them may not be safe. As we soon come to find out, there's only so much these trees are willing to take before they lay the saps down.

This sixteen-minute dark comedy from the director of the yet to be released film "Hobo With A Shotgun" is a more than welcome addition to the holiday horror-fare, and will go well along side other low budget Gore-Fests such as Le Bagman, and even longer films like Plaga Zombie: Mutant Zone and Darkness: The Vampire Version. Obvious tributes to the style of past horror masters are prevalent, but a definite sick sense of humor looms over the proceedings. Here be more [LOW LIGHT SPOILERS] Did you think that baby tree getting stomped for no reason would go unpunished? Hell the fuck no. During the tree's rampage of vengeance, a mother is grabbed by branches and her baby goes flying to the cement. As she screams in horror "My baby! My Baby!" Another of the trees hops four feet into the air and with its severed stem, lands a crushing blow, splattering the baby's head into strawberry puree.

One tree's branches go in a woman's mouth and come out of her eyeballs, then they go through her frustrated lover's eyeballs and out of his mouth, and then the pull their two faces together. It's like some sick ass Fulci's Lady and the Tramp version of the spaghetti scene or something.  Some dude (who's obviously got some serious emotional problems) drills a hole into one of the trees stems, slathers it with petroleum jelly and well... you'll get the idea at least when he slides his fingers inside. Oh, and does the tree fuckin' rape the guy afterwards during the chaos? You bet your prickly pine needle it does! [/SPOILERS] I dig Treevenge. I'm a sucker for short films with deep rooted gore influences and insane happenings. When films don't make any sense at all, are absurd and just fucked up for no reason, I tend to find more enjoyment in them. There are times when this is not true (H2) but I'll not discuss that for even the thought of headache inducing beats and flashing lights may lay me out. Things here got pretty corny, but it probably helps that the main man in this is the splitting image of Joel McHale. So that all works out. Also, there's this really hot blond Twihard in another family with a decapitated cat and a broken tele who I'd like to just take under my branch. If she were a tree I'd cut her down and then climb her, if you know what I'm saying. What in the fuck!?

While not the greatest thing I've ever seen, Treevenge sure did quench my appetite for the quote-unquote holiday season. Which really, I had none to begin with. It's definitely got its moments and it's fun as hell, so there's no faulting the thing despite the supposed lacking spots (some of the dialogue, if at all). Though those moments did add to the surreal feel of the whole thing, so you can't really blame em. I did like that "I should have stayed in school!" line that came right out of nowhere. These guys sure as shit hate trees, but why? From working with them, or the smell of them, or the sight of them? I guess they just f'n hate nature.

Watch in on TWITCH or on teh YouTube.
Laid to Unrest by DrunkethWizerd

Had the pleasure of catching Treevenge at it's Canadian premier at TADFF '08, and also meeting Jason Eisener at the same screening!

Can't fuckin wait for the full length Hobo With A Shotgun...it will most certainly be glorious. :D

Holy crap that was brilliant.