Are you watching Transformers: Prime?!

If you're not watching the new CG Animated series Transformers: Prime, then I've got a few words that may catch you by surprise:
Zombies. Do I have your attention? Robot Zombies! Muahahhahahaa! Yessss...
I was skeptical at first upon seeing the sleek yet very strange character designs. It's movie-verse meets the last cartoon series TF: Animated. The result? I'm really, really liking it. And I don't know why for sure. The movies sure as hell piss me off with characters that look indistinguishable junk piles and the Animated cartoon was a bit too kiddie for me. But it seems as if the very best aspects from both programs, as well as past history, have been fused together to form something special this time. (Welker and Cullen are back together once again performing their original voice roles for Megatron and Optimus Prime. Nutbust?) 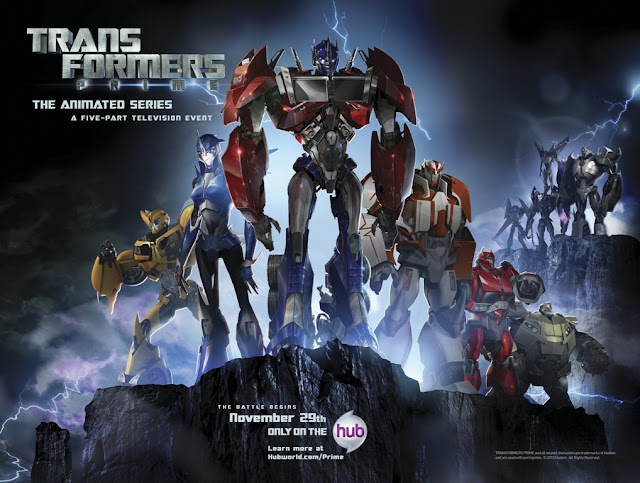 The third episode aired today, and will air once more tomorrow at 6pm ET followed by episode 4. Then again the next day with 4 and then the last part of the mini-series. *UPDATE* All five episodes have been uploaded on the Hub website! Check it out.

I suggest that you check it out. I haven't at all been interested in a Transformers cartoon since Beast Wars ended. Even when that show began, I was anti their new direction. Animals?! That's bullshit I said to myself. It wasn't until I blazed one boring afternoon and caught the Season 2 episode Bad Spark which introduced the Psychotic monster of a bot Protoform X, also known as Rampage! Soon I caught all episodes and the whole series, and it became my very favorite aside from the original film. Since then, the new TF cartoons (and not to mention the films) have ranged from "I want to kill the guy who did this!" to "Watching this makes me want to kill myself!" The only in between being "Meh!" and "I guess I'll watch this whenever it comes on..."
So far what I had considered to be potential flaws have not been that bad. One which worried me were the fact that there are "drones" in this. There's nothing worse than nameless faceless bots in a Transformers series. [Rant] Bob Skir tried to bring that shit in when he did Beast Machines, and don't get me started on that big fucking pile of crap. It's bad enough that he brought plant life and hippies to a Metal world (do induce vomiting), but he damn near tied score with that horrid crime by making the first season of that forsaken show boring as all fuck with nothing but non-transforming bastard versions of beloved characters chasing or being chased by identical drones! It's no wonder nerds all over the country were breaking out their homemade sniper rifles and sent multiple death threats to the guy, causing him to cancel his appearance at Botcon that year. It would have been his disappearance, had he shown... from what I was told. [/Rant] The drones aren't horrible this time around. They look cool and they're strong and they speak... and for now they're not overused. Let's hope things stay that way. Or they develop some personality. I'm hoping some of the Robot Zombies develop personality and [Bay]Shit Gets Real![/Bay]

The introduction of Darkness Rising Part 2 between Megatron and Starscream really caught my interest and I can tell from part 3 today, that I will be enjoying this series. There's so much potential. Let us pray to the dark lord that they don't muck it up.
Did I mention that Dwayne "The Rock" Johnson voices CliffJumper?

If nothing I said here affects you, there's no denying that The Rock is totally badass. You candy asses!

Email ThisBlogThis!Share to TwitterShare to FacebookShare to Pinterest
What the... Animation, Robots, Transformers

See I miss all kinds of awesome shit because I don't have Hub. Thanks for the head's up on this, sounds awesome. Something for me and the kiddo to check out tomorrow after school.

I gotta say that I enjoyed the series, (thanks to the magical interwebs) but it is very dark, where is the laughter? So serious Mr 'Making an important speech' Prime.

Ratchet is GOLD! Welker is great to hear again as Megatron, but I would like to see more of Cliffjumper.

I look forward to more, like a cat eyeing a particularly comfortable looking sand box.