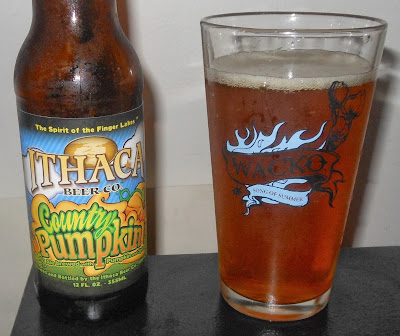 About: "Country Pumpkin is our medium-bodied harvest ale brewed with a medley of flavorful malt, pumpkin puree, Magnum hops and a touch of seasonal spices. The masterful blend of 2-Row, Vienna, Munich, Caramunich and Honey malt with Magnum hops balances the sweet pumpkin with an aroma of nutmeg, cinnamon, ginger and allspice to create a rich, malty ale for the autumn season."

Thoughts: Poured a very cloudy dark amber with shades of dirty orange. It's extremely carbonated and had a solid slightly yellowed one-finger head.

It's got the average pumpkin pie beer scent to it. Very sweet and mild. The scent of "beer" is very apparent, so it's not straight up pumpkin, but about half of it has got a canned pumpkin pie puree scent. Not too heavy on the clove, wait, are there cloves in this? I'm getting basically cinnamon and sugar, and a little nutmeg.

Taste is an amplified version of the scent. Starts out with some typical brew notes, which are slightly bitter, then the cinnamon comes rushing through and it's a bitter blast. Light caramel. It's very yeasty, and bready... and it's as if the pumpkin half and the beer half are at odds here, not mingling together in harmony. There's a lot of spice here that lingers on the tongue, but the problem is that the main taste of the beer and the initial rush of sweetness drops off immeditely.

Mouth is a medium, and it's kind of prickly. Finishes pretty clean and leaves a very dry, dusty mouth. Aftertaste isn't the most pleasant thing about it either.

It's hard to say if this is watered down tasting or if it just wasn't made strong enough. Either way, it's only just another basic pumpkin brew to me. It's not the worst I've tried, but it's far from being a superior brew in its class.

Email ThisBlogThis!Share to TwitterShare to FacebookShare to Pinterest
What the... First Batch, Ithaca, Pumpkin Beer