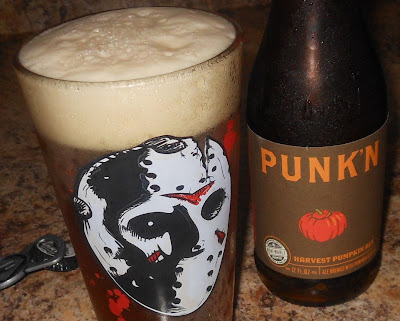 About: "This sessionable pumpkin ale is brewed with fresh pumpkin and seasonal spices. Malt and hops accented with roasted pumpkin and spices of the season. A subtle hint of vanilla and honey. PUNK'N is a wonderful compliment to foods with nutmeg, cinnamon, and clove flavors (naturally, I guess). Try it with roasted turkey, squash or pumpkin ravioli, peach cobbler, or pumpkin cheesecake. / Winner: 2010, Silver Medal, World Beer Championships."

Thoughts: PUNK'N poured out a mild orange color with a huge off-white head. The beer is very clear and there's the carbonation seemed spent upon pour.

First off, with the exception of the Imperials, this has to be one of the best smelling Pumpkin Ales I've ever smelt. Even during the pour when I got the first whiff I was pretty amazed by it. It's got the perfect pumpkin aroma going on. It's very earthy, but also very fresh and a totally sweet too. Nothing is hidden about this beer, it jumps right out at you. I like that.

It's very flavorful for the first few blasts. There's a gentle bitterness and it's not overly sweet, but it's got a seemingly perfect amount of spice to it. Loads of nutmeg and pumpkin mash come through. It's lighter on the cloves and the cinnamon isn't at all overpowering to the brew. It's sweet and mild, doesn't drop off too fast and holds its own.

Mouth is clean and smooth. Hardly watery in nature, this is a light beer that doesn't taste light at all, nor does it feel it.

This gets a passing grade from me, as I'm pleased with this purchase of a six pack. But after that I'm done with it. Until I can find their Imperial (which I'm dying to try!) this one has nothing more for me, other than I didn't curse myself for paying ten bucks for six of them. At the end of everything, it's still pretty weak overall. It's still better than a lot of the other so-called 'pumpkin' brews out there (of the session ale variety), and I'm impressed that it tastes so good for such a low ABV, but at the same time, I can't say go out and buy tons of it. I don't have much praise for session beers after all. But I think we may have found the best of that category here.

Email ThisBlogThis!Share to TwitterShare to FacebookShare to Pinterest
What the... Pumpkin Beer, Uinta