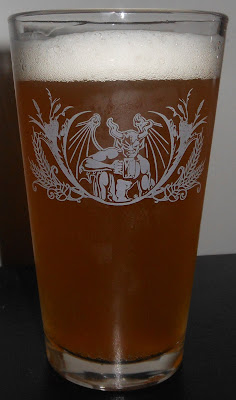 About: Late last year Anthony1138 sent me two more bottles of his awesome home-brews, another Pumpkin brew of course and this time a White IPA (I did a follow up review on his Pumpkin Brown Ale which can be found under the Double Vision section of my blog - which is a tag for when I revisit a beer and decide to blab some more). I'd like to take this time to thank Anthony once more for being such a great pal through these years. Dude, wherever you are and whatever crazy shit is going on, I hope you're drinking some kickass beers, watching some demented Italian films and feelin' good, man.


Thoughts: When I got the bottle of this in the mail it looked insane. There were funky clouds swirling throughout the whole bottle. I let it rest a few days so some of that yeast could settle, but that only made it angry! When I opened it the cap almost exploded into the stratosphere.

WIPA poured out an uber cloudy light yellow with a huge fluffy white head, and it immediately fogged up my pint glass. I had to wait a while to pour the rest from the bottle before taking the pics, as the head filled up about a third of the glass at first. Carbonation is a heavy medium, and there seem to be a few black peppery flakes in here. Not many, but they're clinging to the side of the glass.

This beer has lemon zest all over it and it smells really really good. There's a light spiciness to it, and it's got a nice aromatic quality as well.

The orange peel really comes blasting out in the first sip. Wow. I love orange peel too. I always eat about a third of the peel when I eat an orange. There's a ton of wheat in this, and while the Belgian Pils malt seems a bit overpowered by it, it's still there just enough to influence the flavor of this thing. Nice balance. It doesn't really go off in any one singular direction, but rather maintains a tasty fusion of all the ingredients that mingle together harmoniously.

Mouth feel is really slick. It leaves a slight film on the teeth, but it's really smooth and just a little bit dry. Nice work on making yourself a sessionable, interesting and great tasting brew. Keep it up. If I ever move out of my crawlspace the first thing I'm going to do is go get the tools to make myself some crazy concoctions. When that day comes you can expect a black licorice maple syrup harvest pumpkin cinnamon baked french toast oatmeal stout in the mail.