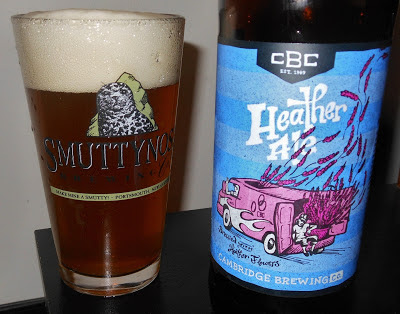 About: "From out of the darkness of pre-recorded history, Heather Ale is an altogether unique brew. Originally crafted by the inhabitants of coastal Northern Europe, Scandinavia, and the Northern British Isles, fresh heather flowers and other herbs were used to balance and flavor the rustic yet sweet toasted character of the malted barley. Its brewing tradition existed long before the advent of hopped beers, and has continued, sporadically, in small rural communities for millennia.


Brewed with imported Scottish floor-malted barley, fresh hand-harvested heather flowers were added to the kettle during the boil along with sweet gale and lavender, with a further addition of fresh heather and yarrow to the conditioning tanks. Each year the CBC brew-staff handpicks the fresh herbs for this beer from a field along the Atlantic Coast, and adds them into the brew-kettle the very next day. The aroma and flavor are a surprising jog of ancient memory, with commingling subtle notes of heather and honey and an obscure wildflower spiciness complemented by the interplay of mild but assertive, toasty-sweet malt.

Note: Pregnant or breastfeeding women may wish to avoid consuming this beer due to the mild medicinal nature of the herbs used in crafting this beer."


This beer smells really cool. Probably no surprise that it smells of a floral brew. It reminds me a little bit of Samuel Adams White Christmas for some reason. It's got a winter spiced ale type of thing going underneath those huge floral notes. When breathing in real hard, it's like putting your nose right inside a blossoming flower. Really cool stuff.

Before I even get to the taste, I gotta comment on this mouth feel. This beer has an insane feeling to it, it's great. It's incredibly thin and airy, and it just explodes into bubbles and dissolves... now that probably doesn't sound too appealing, but it is so weird and unique and just feels so funny that I love it. It's reminiscent of a soapy type of texture, but doesn't really taste soapy which is a fear that some brewers have with lavender additions.

Of course it's got all of that floral tone from the scent right in there with the taste. A light malt backup gives off a gentle semi-sweetness, and among that there's a soft peppery flavor that goes along with it. It's very crisp. Toasted malts aren't all too sweet, and do have a little bit of raw touch to them, but that helps this beer right along without taking it to any extreme area. It's got a decent bitterness, a decent sweetness, tons of flavor all around and it genuinely interesting.

Overall the taste is pretty unique, and it's got a great aftertaste too. A fun little beer. 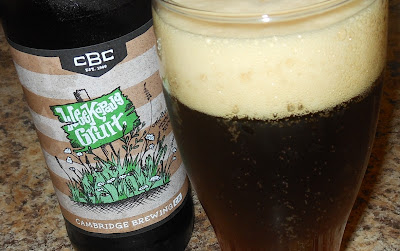 About: "A modern take on a mideaval, unhopped herbal beer! Produced for centuries, long before the use of hops, Gruit (pronounced “grew-it” or “groot”) was what beer was throughout the Middle Ages. Our contemporary interpretation of gruit is brewed with malted barley, wheat, and oats, and fermented with our Belgian yeast. It also incorporates the traditional brewing herbs sweet gale, yarrow, and wild  rosemary, along with Labrador tea, licorice root and nettles, all organic and wildcrafted."

Thoughts: Weekapaug poured a deep and hazy dark-auburn orange and featured a big, light-auburn almost tan head that began to rapidly deplete as I started snapping photos. It's loud too. Definately the loudest head I've ever heard before. Kinda sounds like rice crispies, that's how loud these bubbles are popping! Nuts.

Speaking of nuts. It's very nutty. Not really peanuts though, slightly off. Yeasty nuts more like it. And yes, I did stop and giggle to myself after I wrote that. The scent immediately reminds me of a certain Dogfish Head brew... Pangaea.

Taste is that of the smell. It's very mellow. There's a hint of light butter in there, or are the herbs just playing tricks with my mind. It's not remarkably sweet, but there's a lingering sweetness throughout the whole beer. When you first get some in your mouth it's just slightly tingly and almost hints at being spicy, but not really. There's an almost sour-like tinge that can attack if you let it hit the right spot, but mostly it's only a weak puckering effect. It's a bit fruity up front, like a semi-sour citrus, but the herbs mix in quick and take the flavor to a strange otherworldly dimension... then after it's swallowed there's that lingering Belgian yeast / peanut note. It's not bad.

Mouthfeel is that of a semi-flat soda. It's very smooth and crisp through. Starts to dry the throat after a while.

This beer goes through a few fun little stages but it doesn't seem terribly complex. It's like a strong tea rather, with a bready malt backdrop. This beer is ranking for me as a very decent end enjoyable experience. I'm not going to go out and re-buying it anytime soon, but I would like to try other beers of this seemingly rare style. After all, the very few beers I have tried that taste like (two or three of them) have all been unique and also pretty good, though all very similar tasting. Something about these types of beers intrigue me in a strange way. I don't yearn for them, but I'm still rather fascinated and want more.