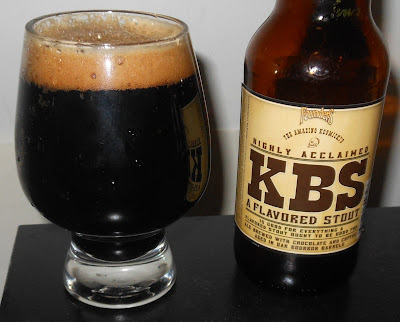 About: "What we've got here is an imperial stout brewed with a massive amount of coffee and chocolates, then cave-aged in oak bourbon barrels for an entire year to make sure wonderful bourbon undertones come through in the finish. Makes your taste buds squeal with delight. Note, this is NOT simply barrel-aged Breakfast Stout. It is an entirely different beer."

Getting a huge aroma of chocolaty coffee. The coffee is slightly taken aback next to the huge amount of cocoa there. It smells really sweet. The dry roasted notes are coming through and it's nicely done, but the chocolate is where it's at man. I never drank coffee without chocolate back in the day. When it got cold, or when I ordered it iced, it smelt like this. There's something else lingering around in there too... some kind of leafy, dark fruits.

Flavor is coffee on the first gulp, followed by a huge amount of overwhelming chocolate and a very nice ride out on the end. The bourbon really comes through the more you hold it in your mouth. The longer you hold it, the more intense it becomes and the more intense it becomes the more awesome it is overall. There's a gentle burn to the beer, and the thing about it is that it hits as just the precise moment where it floods in and is about to overtake and then slowly falls back allowing you to enjoy the real essence of the flavors here. Once you're past that all the flavors blend together so get ready to experience greatness. I feel a bit of dat grass on the very back of the tongue as I start in on the second half of the bottle. Overall it's very sweet. Tons of wood. The barrel aging flavors really kick in after the palate adapts to initial shock of intense liquefied pleasure. After transcending to another plane of existence, it starts to taste like the beach: Firewood, alcohol, roasting smores, maiden water all over your fingers (Hello ladies!), stale cigarettes you shouldn't be smoking, wet clothes, insanely high event stories told by a homeless drifter, sand in your crack, and hopefully getting home safe to wake up and thrash another day. Dark fruits and citrus try as they may and try as they might to come out, but unless you've got the patience all you're getting is swamp grass and booze as an afterthought. In essence: Chocolate, coffee, booze, dark fruits, hazy spice from that oak, and minor hints of black licorice after sipping for long periods.

KBS tingles on the tongue from the moment it hits till it's swallowed. Mouth feel is pretty syrupy, but it leaves relatively clean. All of the taste remains afterwards, but the initial coating of the mouth slowly fades out and end just a little bit dry (most certainly from the oak). It's pretty cool.

This is a pretty awesome beer, but I don't know if it's just rare for the sake of being rare. I remember seeing their also-much-sought-after Breakfast Stout sell out immediately and people were going absolutely nuts, clamoring for it. I was used to seeing one or two 4-Packs one day and they were gone the next - leaving the shelf empty for two weeks or more. Now I'm seeing TONS of the stuff sitting there, and people are going bat shit crazy over this release. Is it all part of the ruse? KBS got shipped (apparently according to "the net" and one cool as shit motherfucker at the liquor store) only one case per store in most parts. The dude bought  himself a 4 pack, saved a 4 pack for a friend, saved another 4 pack for a customer call in, and when he left his shift that fateful day, there was only one 4 pack left in the fridge. I was the man who showed up just after that. Yeah, I got the last one. Happier than a pig in shit? You fuckin' bet. Totally stunned by the beer? Well... It's worth the five bucks a bottle. Though the "rarity" factor really kicks in on something like this, truth be told as always, after I drank my last bottle of KBS I popped open a 2012 Sierra Nevada Bigfoot and it downright blew KBS away by miles! That's my story and I'm licking through it.