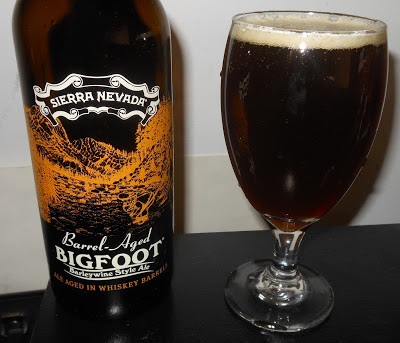 About: "Our Bigfoot Barleywine is a craft beer legend. Each winter, this beast of a beer appears and wreaks havoc on unsuspecting palates with its intense bittersweet flavors. This year - in honor of the 30th Anniversary of this style-bending brew - we're releasing a very special version of this cult classic: Aged in oak whiskey casks for nearly two years, this barrel-aged Bigfoot is incredibly complex. The assault of resinous hops has mellowed, and the influence of the wood has shifted focus toward the malt - with rich burnt-sugar flavors and notes of vanilla, toasted coconut, and raisins. Grab this elusive beast while you can, because it won't be around for long."

Thoughts: Cork was a rough one. The cap on the cage has some really cool artwork of two mingling hops. Light pop off the cork after all that work. Poured a grainy dark ruby / burgundy color with a small frothy head that left a thin layer atop the brew and some thick puddles that lasted forever.

This beer smells outstanding. Holy shit it has a strong scent to it. It's total candy. Incredibly sweet smelling. I'm getting rich hot chocolate, candy bars, 3 Musketeers melted down over smokey wood and mixed with whiskey for a bad boy milkshake. With a beer like this you've gotta let it warm a little bit to really get just how deep that whiskey is. I love how it just intertwines with this already incredible tasting beer, the essence of it just pulsating throughout the

Wow that is fucking spicy. Holy shit. I got a little bit of spice in the scent but that just came out blistering! And hot damn does this whiskey barrel aging just simply Dominate the brew. Two gulps and I'm feeling the heat in my lower chest. The whiskey notes really start to come on full and throughout in the scent, but when you get this in your mouth it just cracks the bottle over your head with it. Talk about intense. A deep haze of smokiness follows the swallow and the hops which are usually off the charts in this barleywine are very laid back, though still quite noticeable. It adds up to a nice unique flavor in the aftertaste, and what a splendid aftertaste is it. Talk about mellow, yet effective. This beer has a sting to it alright, and it doesn't die down with each and every small gulp either. It seems as if it is intensifying, or at least holding its original strength which is very rare. Very peppery, absolutely love the burn from the booze, smokey and sweet, it has a very gentle bitterness and it's in your face with all the flavors. Top notch stuff.

For the mouthfeel I've gotta stay that this beer is pretty damn thick. Something to be reckoned with. It's not sludgy, and it's definitely not thin. This stuff coats like oil and leaves a resinous raw hop flavor on the back of the tongue which is offset by the all around sweetness and excellent whiskey flavor.

I remember drinking Bigfoot so many years ago. I used to buy a six pack of Celebration every year, and on the second year of doing that I remember I picked up a six of Bigfoot. This is back when I didn't even know what craft beer was. I grew up in California, and Sierra Nevada had a great distribution to all supermarkets. I remember drinking Bigfoot in 2001, 2003 and 2004. Celebration and Bigfoot have always been special brews to me. When I finally found this one and only bottle on the shelf after driving all around the state, I couldn't not grab it and take it home.