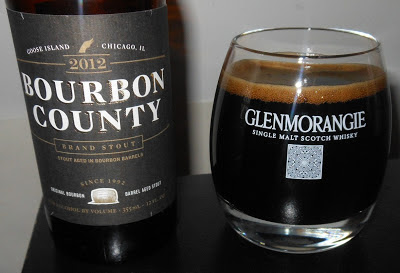 About: "I really wanted to do something special for our 1000th batch at the original brewpub. Goose Island could have thrown a party. But we did something better. We brewed a beer. A really big batch of stout so big the malt was coming out of the top of the mash tun. After fermentation we brought in some bourbon barrels to age the stout. One hundred and fifty days later, Bourbon County Stout was born. A liquid as dark and dense as a black hole with a thick foam the color of bourbon barrels. The nose is a mix of charred oak, vanilla, caramel and smoke. One sip has more flavor than your average case of beer. It overpowers anything in the room. People have even said that it’s a great cigar beer, but I haven’t yet tried a cigar that would stand up to it. - Brewmaster Greg Hall. Hops: Willamette / Malt: 2-Row, Munich, Chocolate, Caramel, Roast Barley, Debittered Black / Preferred Glass: Snifter / Food Pairings: Flourless Chocolate Cake / Cheese Pairings: Capriole Bourbon Chocolate Torte / Cellaring Notes: Develops in the bottle for up to 5 years."

Thoughts: Found the last one of these hidden in the back of a singles fridge, surrounded by Miller Lite and Mike's Light Lemonade. Who would have thought. Cap was hard as fuck to peel off. BCBS poured a super dark opaque black with a little dark brown head.

This is some really strong smelling stuff. That bourbon really shines through here. Nice. The beer smells sweet and mild, there's loads of dark chocolate, underlying notes of raisin and plum, and some sugary marshmallow. All of it drenched in Whisky. Can't wait to indulge.

Awesome! This beer just rolls around in the mouth. I got a smooth chocolate malty sweetness right up front before that whisky blazed its way in and after the swallow a little blast of coffee exploded. I was wondering if any coffee was going to show up here, as I didn't get any in the scent at all. Second gulp got a little bit of that alcohol sting, a bit of a haze, and the black cherry / raisin / prune really came in with a sting. This beer is pretty amazing tasting. I don't usually drink whiskey, although I did go through a phase years ago, and this really brings it all back. It's just enough too. The whiskey doesn't overpower, but instead lends a beautiful uniqueness that comes on in a wave. It's really sweet, hot, woodsy, leaves a gentle fire in the belly, a smokey haze in the mouth and a nice feeling upon the brain.

Mouth feel is a soft medium, but it really spreads itself out in when you hold it in. It doesn't get fluffy or foamy at all, just kind of expands and stings. I like this one. I like beers that have a strong presence to them, and I really like 15-18% beers... this one though, seems like it's missing something. It's got a mild kick, it's tasty and smooth, but it's not really velvety smooth. Just a texture thing however... I'd really rather have had two of these instead of just a single, to explore it further. There's always next time I suppose.