About: "This was the first beer in our Ancient Ales series. The recipe for this beverage is based on the chemical analysis of residues found in clay vessels believed to date back to the 8th century BC. Originally discovered in Gordium, Turkey during a 1957 dig by archaeologist Rodney Young, the content of these vessels was left unknown for 40 years. In 1997, molecular archeologist Dr. Patrick McGovern received a phone call from a former student of his informing him of a residue on clay jars from the tomb of King Midas.

In March 2000 the owner of Dogfish Head Brewery, Sam Calagione, attended a special dinner for beer writer Michael Jackson. At this time Dr. McGovern and Mr. Calagione met and discussed recreating the brew. In early 2001 the new beverage was served at a dinner recreating the funeral feast of King Midas. The ingredients for the original 7.5% abv recipe in 2001 included yellow muscat grapes, lightly toasted 2-row barley malt, thyme, honey and saffron. The ingredients for the 9% abv recipe include barley, white Muscat grapes, honey and saffron." 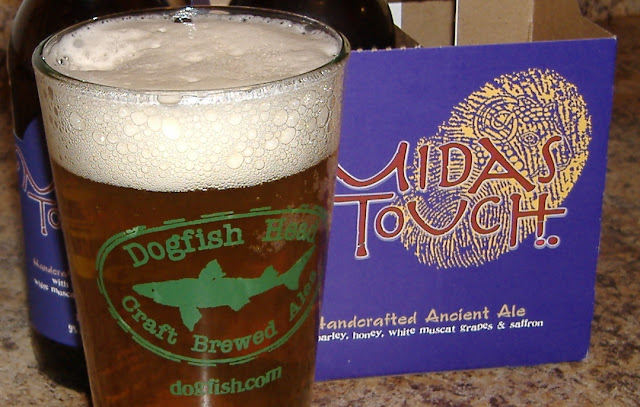 Thoughts: Midas Touch poured a light yellow color with a white white bubbly two-finger head that maintained itself quite well. As I hold up the glass I notice that the beer is transparent with various bubbles rising in lines, but while transparent, this beer is very grainy. These grainy specks are very light yet present completely throughout the beer glass.

This smells pretty good. Like a strong, fruity brew. The saffron and honey in this give it a really nice scent of sweetened herbs.

Taste is very pleasant before a small wave of tickling and cloudy tang kicks in, and then a slight haze of herbal alcohol and grape seed. That slight haze, after a few more gulps, starts to become overpowering for several seconds at a time. While the brew starts off with a calm of barley and honey, all with that saffron blending throughout, the immense zing from these white muscat grapes and higher alcohol really light the fire in the belly, with its smoke is rolling around in the mouth. There's also a peppery quality about the whole beer, not fresh ground black pepper, but a real subtle hint of it.

Mouth feel is a pretty standard medium. It's slightly filmy, but that's about it.

A very fine, if a bit tart and fruity ale from Dogfish Head. The price of course ($4.25 a 12 oz. bottle) will prevent me from purchasing this again any time soon. I really like what these guys are doing and wish that many other breweries would put more of a spin on their shit like DFH, but it's hard justifying the prices on these small bottles. I've got addictions to support and mental health issues to feed. And I understand that two bottles is 24 ounces and that's a Bomber for eight bucks and I do that all the time, but at least make it a 6 Pack for fifteen bucks or something. I hardly ever see full 4 Packs around here anyways, there's always bottles missing.