Dogfish Head Noble Rot - Ale brewed with grape must and with grape must added. (2012)
Occasional Rarity.
25.4 fl. oz. / $13.39 USD / 9% ABV
About: "This saison-esque science project gets complexity and fermentable sugars from two unique wine grapes sourced with our friends at Alexandria Nicole Cellars in Prosser, Wash. The first addition is unfermented juice, known as must, from viognier grapes that have been infected with a benevolent fungus called botrytis. This noble rot reduces the water content in the grapes while magnifying their sweetness and complexity. The second is pinot gris must intensified by a process called dropping fruit, where large clusters of grapes are clipped to amplify the quality of those left behind. "This is the absolute closest to equal meshing of the wine world and the beer world thats ever been done commercially," says Dogfish's Sam Calagione. Noble Rot is brewed with pils and wheat malts and fermented with a distinct Belgian yeast strain. It has a spicy white wine body and a dry, tart finish." 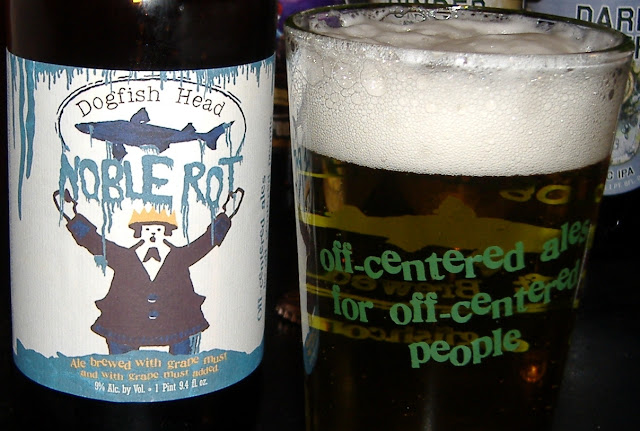 Thoughts: Super Light, completely transparent, yellow toned and nearly almost colorless liquid came pouring from Dogfish Head's newly designed bottle with extruded logo. The head was completely white, massive and full of about a million and a half bubbles that later left a thick foam on top and in puddles around the glass. Carbonation is a low medium, but it's moving.
The scent is that of a Belgian Ale straight off. Sour peanut butter and grape jelly jump right out and there's an underlying crusty crackers to it. It smells of a wine, but not too strong of one, and it as the same time does smell of a beer, but it's very faint and hiding.
It's pleasant at first, a lot smoother than I thought it would taste, and then there's a huge zing of tartness that shocks the senses. Let's try it again. It's actually pretty sweet, surprisingly sweet even, and the sour notes really only kick in after the swallow. This wine, er.. beer, is very mellow and laid back. After a while there's nothing harsh about it. There's no kick of high alcohol, but instead just a lingering sweetness from those grapes.
Mouth is a medium watery with some bubbling fizz around each gulp, and it's a bit coating. It's not drying at all either.
I poured the second half into the glass and watched the head form and then deplete. This one is really cool since the head starts out as four fingers and then as it fades away it looks just like snow melting in a fast forward time lapse that takes a while. Maybe it's the twelve hour work day, or this shit is really kicking in... or perhaps I'm having an acid flashback, but overall I'm going to have to say that I enjoyed this beer. It's got a scent and taste that I usually associate with sour or funk sometimes, but the sour here is very light and welcoming, and there's no funk to be found. There's only sweet and mild sour mellow light golden refreshing goodness.

Email ThisBlogThis!Share to TwitterShare to FacebookShare to Pinterest
What the... Beer, Dogfish Head, Farmhouse Ale