About: "Brewed with Natural Ingredients." I can't really find any info on this one... well, except for THIS. 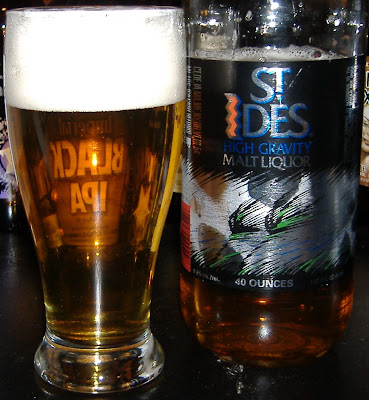 Thoughts: Poured a very yellowy yellow with a big stark white head that didn't budge for about five minutes or so. It's very transparent and there is a very healthy medium amount of bubbles rising up from all different areas. It's actually an interesting flow of carbonation that I don't regularly see. Usually it's a lot faster or slower, more bubbles or nothing at all. This one is maintaining in all different spots and they're rising all at the same speed but from at various times.

Smells pretty malty, and a little bit sour. There's a peppery tinge towards the end of it.

There's not really much going for this beer in terms of taste. It doesn't taste bad, in fact it tastes pretty good and it's more than tolerable. It's a little on the sour side, but that's the only real problem, if you would call it that. There's a lot of corn it seems. It's slightly pungent. It actually tastes a lot different, vastly different even, when you pour it into a glass. Straight from the 40 oz it's seemingly stronger and you're blasted by more (of its trademark) skunk. I guess the bottle encloses it all in for the drinker to indulge in with each gulp. Nice.

It's a medium watery brew. Easily drinkable but a tad thicker than other watery beers.

It's weird going back and revisiting these beers I used to drink when I got fucked up and now noticing that they don't really have much of a taste at all or that they don't taste as bad as I remember them being. Maybe I still haven't gotten to the rotten shit though... I wonder how the other Malt Liquors are going to hold up. The ones I don't like, yet drank occasionally.

About: Not really much in the "about" portion of this, but I do know that this brew is brought up numerous times in the songs from Sacramento, California horrorcore rapper Brotha Lynch Hung. Not to mention it's basically been a shout-out brew for rappers throughout history anyways. This beer is everywhere in sight, and always has been. Here's a website with a whole bunch of white guys drinking it. 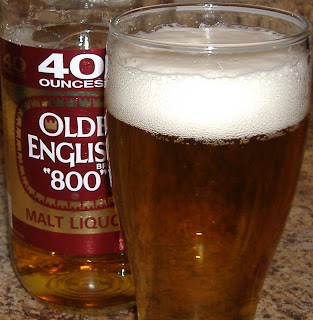 Thoughts: OE poured a golden auburn color that was completely transparent, with a pretty big bubbling white head that lasted about a half a minute before receding into a ring of foam. There's a single stream of carbonation bubbles rising up the around the middle of the left hand side.

Alright, that's more like it. This smells funky. Spicy, somewhat sweet corn and water for the most part. It's a bit yeasty smelling too.

This tastes a lot like stale cereal. Honey Comb, actually. But Honey Comb after the box has been opened for a week and it gets a weird ass consistency to it where it's halfway a gummy mush. Or does it seem that way fresh as well? There's a little bit of a spicy tingling around the lips and on the tip of the tongue as I drink this. After breathing in It's like getting slapped by corn husks dipped in corn syrup, with no additional flavorings.

It's a little frothy and not as terribly watery as it seemed to appear earlier. There's a tingle in the mouth as well. Easily chugged and put down, but in all honesty, it actually tastes worse when you chug it. Perhaps because there's must so much of it flowing that you don't get the residual effects of the afterbite.

About: Since there's no information on this shit anywhere, here's what's on the label: "Smooth Tasting Premium Malt Liquor Naturally Brewed with Select Ingredients (Water, Barley Malt, Corn, Yeast and Hops) for your Drinking Pleasure and Complete Satisfaction. " 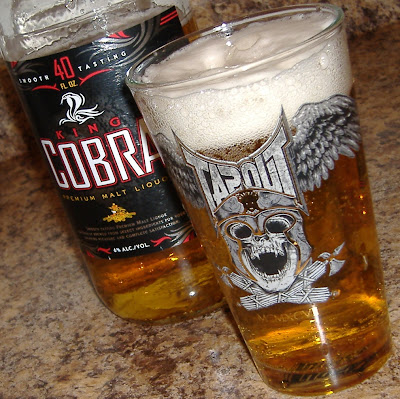 Thoughts: Yeah, I'm pouring it in a glass (but don't worry, I'm drinking the second half out of the bottle). King Cobra poured an ultra light yellowy color with a fizzy stark white head that actually lasted about a minute and a half. It's completely see-through and there are a ton of carbonation bubbles rising up the sides of my pint glass.

Doesn't smell half bad. Little bit boozy, but very sweet. Low frequency levels of malt and a little something that resembles hops, but I'm not sure if there's any hops in this. When I first popped it open it smelt pretty crisp.

Got an underlying sweet creamed corn flavor that resides on the tongue. Not much in terms of taste, and it certainly isn't very eventful, but it's sweet and mild. Aftertaste is of corn flakes, and if you search around a bit, vegetable oil. Mouth feel is ultra watery and thin feeling. It leaves the sensation of a slight film on the teeth.

It's been so long since I had a 40oz of King Cobra. When I was seventeen, the girl next door who I would toke and drink with called me "King Cobra Boy" a few times since this was poison of choice back then. I don't know if this beer used to be real harsh or perhaps I'm mixing it up with memories of St. Ides, Olde English HG 800 or something else, but this is actually remarkably smooth. It doesn't taste as bad as I remember... and while it doesn't taste great or anything, it's still pretty decent. This beer is very reminiscent of Natty Daddy and Bud Light Platinum. In fact, it just may be exactly one of those beers(!) only with a different label, and in a 40oz bottle. Bwah!

Email ThisBlogThis!Share to TwitterShare to FacebookShare to Pinterest
What the... Beer, Malt Liquor