Pretty excited about Snow White and the Huntsman!

Being a fan of Disney cartoons, pale white girls with black hair and red lips, insanely jealous beauty-obsessed witches, poison apples, ravens, magic, darkness, evil, innocence, fantasy and zany little dwarves, it should come as no surprise that I'm going to be viewing the new Snow White film in the cinemas upon its release. And what makes is oh-so-much sweeter than a poison apple delivering a life long coma, is the two women they've got at the opposing ends: 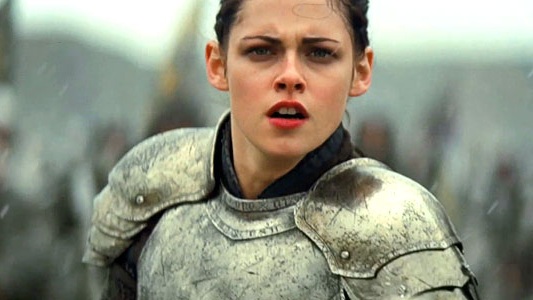 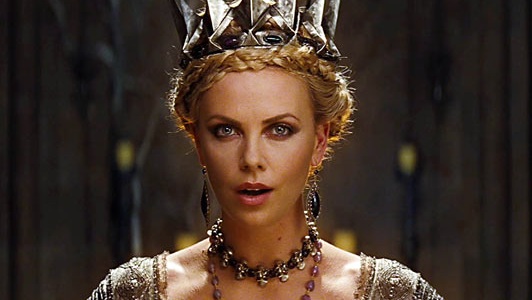 I am seriously obsessed with Kristen Stewart. She's the kind of girl, woman and actress, that I will own every film that she's in no matter what. Much like Rose McGowan, Asia Argento or Evan Rachel Wood (apparently Marilyn Manson and myself have very similar tastes in women!). I cannot get enough of her. And then there's Charlize Theron. Dark Lord grant me the strength! Don't get me started on just how drop dead gorgeous this bitch is and all the dirty, filthy things she's done on-screen to drive me nuts. Yeah, I even tugged it out to Monster.
So the new trailer for Snow White and the Huntsman looks pretty badass. I did notice early on that there was a slight similarity to Tim Burton's Alice in Wonderland with the whole Girl in Armor theme, but it didn't bother me one bit since Kristen looks damn good like that... and so did Mia. But the Alice remake left a sour taste in my mouth, and while I liked a lot of it, it just ended up letting me down. When I saw the scene in this trailer of the beastly guy intimidating Snow White, I recalled the exact same scene in Alice and that scares me a bit; same producers and all. Here's high hopes that this film won't feel as empty!
Nothing however, if this film even turns out remotely bad which I highly doubt, can possibly compare to how horrible the other Snow White film released this year looks. Mirror Mirror starring Lily Collins and *hold back the vomit* Julia Roberts. She in no fucking way whatsoever what it takes to make an Evil Queen, and just comes off looking ridiculous as fuck! Though, so does the "movie". If it weren't for the fact that Lily Collins looks so stunningly beautiful and pristine as Snow White, I wouldn't give this shit-fest a second glance... but chances are I will rent it... if just for Lily.
So as it stands with SWATH, I think it looks pretty damn good... with the hot chicks that I lust, and Chris Hemsworth (doing his best 'Brad Pitt from Snatch' impersonation as the Huntsman!), and aside from some of the horrible little CGI characters (not the Dwarves), it looks like it could all be a pretty hot affair. If only it were rated R! Because Charlize bathing in that (I think it's) milk, while nude yet covering her boobies, is a bit of a irk-point for me. Never cover the boobies ladies. Those seven dwarves wouldn't be so small is she just let the girls out. All I'm sayin'.
Laid to Unrest by DrunkethWizerd

Email ThisBlogThis!Share to TwitterShare to FacebookShare to Pinterest
What the... Fantasy, Movies