About: A New Boston Tradition. Clementine is Clown Shoes Beer’s Belgian style White Ale. Light-bodied and crisp, this is a terrific White Ale with plenty of zest! Hazy in appearance and healthily carbonated, it utilizes Chambly yeast to energetically shape its wheat malt base. Incorporated in the brewing process is Clementine, sweet orange peel, a hint of Coriander, and Summit hops. At a sly, easy-drinking 5.9%, Clementine is dynamic and flavorful enough to satisfy discerning craft beer palates, yet light enough to count among “sessionable” beers." 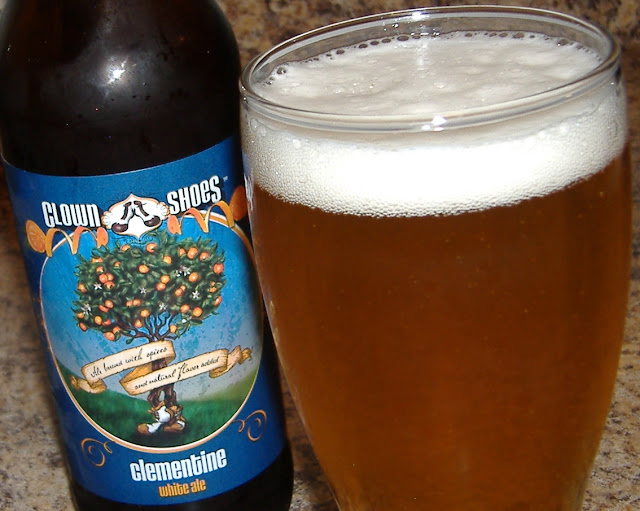 Thoughts: Clementine poured a very light straw yellow with a rapidly depleting stark white sliver of a head. Massive amounts of carbonation bubbles arise from everywhere in the transparent yet slightly hazy brew.

First scent is that of beer - the classic beer scent, if there is such a thing. I lean in once more and it smells vaguely of a Belgian yeast, but I'm not sure if there's any of that in here (I always post company descriptions after my own thoughts are typed up). I lean in once more and it becomes even more evident. It doesn't say anything on the label about that, but there's no mistaking Belgian yeast! Aside from that it smells a bit citrusy, almost like grapefruit or lemon but not exactly both.

Tastes damn fine! Remarkably crisp. That sweet orange peel really comes out in a big burst of flavor, with that coriander lightly flowing through the gulp, there's an underlying flow of raw wheat, and these grassy - but very sweet grassy - hops right at the end that blend right in. The flavors come out all individually, but their blended form is just beautiful. This is a great summer beer. Unfortunately it's 69 degrees right now (lately it's been snowing or cold as hell, much to my liking), so this is fitting perfectly in with the end of my horridly warm day. It's light, flavorful and goes down easy. Alright, I'm pouring in the last third of the bottle... I wonder what surprises are in store:

A welcome change in appearance. The beer is now a complete haze. Small yet long strands of sediment yeast circle and flow throughout the beer before dissolving into the clouds. Dark black peppery flakes adorn the bottom inside edge of the curved glass. The taste becomes slightly more pungent after the bottom of the bottle is in there. This beer is light and watery, not heavy at all and this bomber could easily be chugged down without stopping to take a single breath, or downed in two or three large chugs. But while it's watery feeling and so light, the flavor is complimented by this tingling spice and ridiculous amounts of bubbles.

I wouldn't say that this beer is sour, not at all, it's a bit tart... but sweet at the same time. Aftertaste is pretty chalky for the most part with some very mild sweet and grassy fuzz on the back of the tongue. I'm burping a lot, and each time it comes back up tasting pretty good. I'm satisfied in this beer, one style in which I'm not normally so fond of but don't have a real problem with. Maybe I just got this at the right time, but I think I chose well. One package store has every single Clown Shoes beer and the one I visited today after my twelve hour shift, which is right in the middle between my work and home, has only this one. I probably would have picked this one up last out of their line-up if there was another way about it, but I'm glad it was there for me today.

Email ThisBlogThis!Share to TwitterShare to FacebookShare to Pinterest
What the... Clown Shoes, Massachusetts Beer, Witbier