There is no question! Check out the latest score (not a big one, but it's quality). That's right, picked me up two boxes of MONK'S BLOOD! Fuck to the yeah. Think I'll crack a few of those open while I watch Alucarda, which by the way I'm working on two new posts on the film that will be coming later in the year. 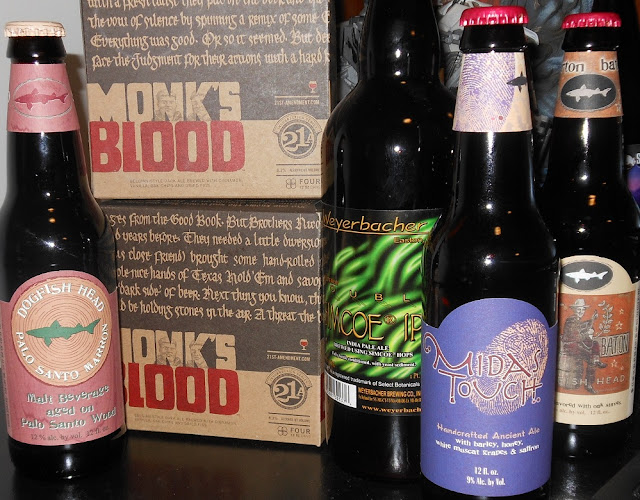 I didn't plan on dropping twenty-four bucks when I hit up the liquor store... but I made myself a selfish promise to buy those four packs on sight! Got the last two they had (though last two weeks they had none and the guy said they came in two months ago). Think I'll drink the Weyerbacher tonight, and keep on saving those DFH brews for later.
Laid to Unrest by DrunkethWizerd

Nice haul! Baton and Palo are amazing beers. I love Somcoe hops, and the Weyerbacher is a good one. Monk's Blood is a beer I've put off trying for a long time, but gave in once I found out that it was being discontinued. I thought it was good, but the flavor combination sounds better than it tasted. However I do think that it will improve with age. I'm putting a can away (I only had 2 because I split a box with my brother, in return for 2 Allies Win the War). I do however know where to get some more. ;)

Definitely put a can or two away... I just drank three fresh ones and they paled in comparison to the dusty shit. Still totally awesome, mind you, but just a little less good.

That's what I was hoping. I'll probably try to grab another box and throw it in the back of the fridge for a long while.

I actually drank the fourth can the other night after having a few pints at the pub and Damn was it perfection! Guess I wasn't in the right state of body and mind with the first three cans. Hmm.