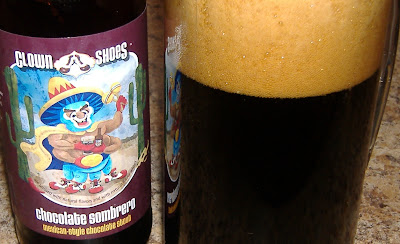 About: "Roasted dark malts plus extra chocolate malts plus ancho chile plus cinnamon plus vanilla extract plus a chocolate loving, beer drinking, Clown Shoes wearing, multi-limbed, gorgeous and glorious Mexican wrestler on the label. That’s the recipe for a Chocolate Sombrero!"

Thoughts: I feel like for this beer, it would be the perfect time to have a mug shaped like a boot. Don't know why.

Smells pretty damn good. Chocolatey, sweet and spicy. There's a roasted tone lingering throughout, a bit like coffee but not really... and there's a hint of cinnamon rolls and dark chocolate.

It's pleasant and only a slight hint of grassy hops around the back end. The taste first off isn't overwhelming in any area other than strong alcohol though, so I'll let it warm and get back to it in a second to see if I can differentiate any flavors. The ancho chiles and vanilla extract really give it a distinct flavor that's pretty nice, and once that and the malty flavors die down there's a calm and gentle hop profile. Nothing here is taken to the extreme. This kind of reminds me of Wachusett's Milk Stout, only with added vanilla and ancho chiles. Last few gulps are peppery than the rest.

This beer is really smooth. Incredibly smooth even. You'd be amazed. It feels light enough in the mouth, but medium on the way down and heavy in the belly.

I know this isn't really a Chile beer, but man, whenever I hear that a beer is brewed with chiles I always hope that it's going to be strong and spicy. The chile flavor here, while noticeable at first, gets overwhelmed by the earthy hops once the brew starts to warm. The cinnamon and vanilla add to the flavor at first, but both of those things always blend in once consumed in this form. The cinnamon isn't strong to begin with and the vanilla is pretty laid back too. Overall this brew is a very tasty, smooth and fun... though, not terribly exciting in any way. 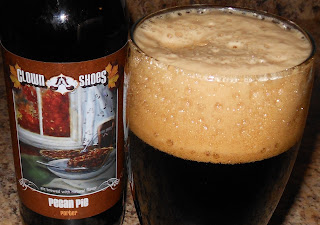 About: "Pecans suck. That’s what I thought as a kid. Now I love them. So much so that I decided to go create a beer in homage to the pecan as it finds the perfect home: a pie. Our Pecan Pie Porter balances sweet and nutty porter flavors with the subtle addition of all natural and organic pecan concentrate and butter pecan extract. The result is mouthwatering goodness."

Thoughts: Popped the cap and there was this strange fruity cereal buzzing around. Very strong. Pecan Pie poured a dark dark brown into a pitch black with a light tan head that exploded out of the bottle.

Smells kinda like fruity pebbles. As I lean in further I get a lot more of a chocolate malt, plums, and a slight hint of booze. It smells interesting, and pretty good.

Huh. Taste isn't as exciting as the scent unfortunately as I was hit with somewhat of an instant blandness, chalky smoke and minor grassy hops. Holding it in, it's mostly a roasted malt flavor. The pecans and oil add a nice little touch, but I'm not really finding anything remotely exciting about this brew. The flavor fades extremely fast, leaving only a little bit of watery chalk behind. Once it warms it becomes even more of a one note brew.

Mouth is absurdly watery with a gentle fizz, and that's about it.

I'm not much of a porter fan to begin with, but I was actually looking forward to trying this. It really sucks that once this beer is swallowed there's an aftertaste of the smell of extinguished cigarettes. Oh, and no, I don't smoke. Sorry Clown Shoes, but this beer is boring! Consider me disappointed.