Dogfish Head Chicory Stout (2011)
Seasonal Brew (Winter, Nov/Dec)
12 fl. oz. (x2) / $4.99 USD / 5.2% ABV
About: "Chicory was one of the first beers we started brewing at our pub back when it opened in 1995. It's a dark beer made with a bunch of roasted chicory, organic Mexican coffee, St. John's Wort and licorice root. We use whole-leaf Cascade and Fuggle hops, as well as pale, roasted and oatmeal grains. Chicory Stout is our winter seasonal and released in bottles each year in November and December. We do brew this beer in smaller, draft-only batches for our brewpub throughout the year. Chicory is roasty and delicious, and it's a fantastic food beer. It pairs very well with chocolate!" 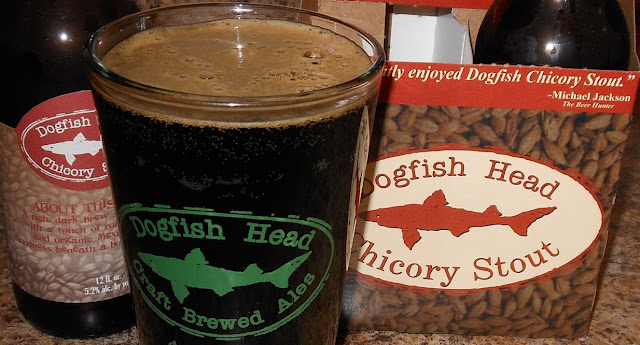 Thoughts: Poured a medium shade of brown that filled the glass with a pitch black hue. The cocoa tan head was disobedient in its forming and once the sliver of it made a presence, it immediately disappeared.
First scent is pretty sweet with a strong aroma of coffee. The roasted chicory makes it stand out a bit, but it smells pretty much of an average quality stout.
The taste is a lot more bitter than the smell led on. It's not super bitter, but by no means is it sweet. It tastes mostly of oatmeal and a lightly roasted non-offensive coffee. The licorice root used is really what sets this one apart from other stouts however. It's a bit underused for my tastes, but the blend is very well done considering it takes the emphasis off the heavy coffee tones. There's a bit of a toasted nutty taste between gulps.
Mouthfeel is pretty light and a little watery, but the brew itself is very filling.
This beer is a bit too mellow for me. The licorice is a really nice touch, but it's not enough for me to be impressed by this beer as a whole. Once it starts to get warm there's a bit of a sour bit at the end of each swallowing. It's not terribly distracting, but it doesn't help this rather standard stout. Don't let it warm, as the low ABV and gentleness of the beer does not bode well.

Email ThisBlogThis!Share to TwitterShare to FacebookShare to Pinterest
What the... Beer, Dogfish Head, Stout

I like this beer a lot. In fact I think I have some in the back of my fridge. The chicory flavor really is what sets this apart from other stouts, though it is a bit on the lighter side for a DFH brew. Considering how "heavy" some of their other styles of beers are, that don't necessarily call for it, it's surprising that this stout would be only 5.2% ABV. But I guess that's DFH for ya, they brew to the beat of their own drum.