I've been bumming around the stores waiting for this to arrive and I finally found one amongst a thrashed display of one and two year old figures (next to the two new Optimus RID Prime figures that it must have shipped with). This is Transformers: Prime - Voyager sized 'Robots in Disguise' Megatron [The second Megatron figure in the Prime series, (with a brand new yet similar looking mold) but the first Voyager (Second biggest to Leader Class) and stand alone piece]. Series 1.5, and release 002, but not the First Edition. Confused yet? 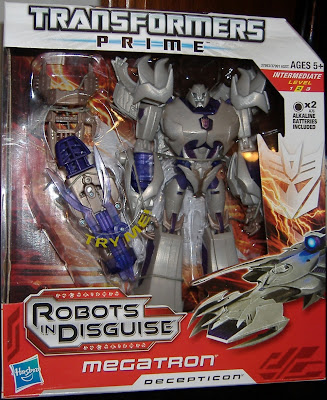 TF:Prime Megatron comes in a really nice window package box with some cool artwork on one side and a mini-bio on the other. It's a pretty standard bio for the guy and everything is presented nicely. His stats have been fairly similar throughout the last 30 years. I had to cut two strips of tape to open the box, nine fibrous threads to remove the figure and his fusion cannon... then three more strips of tape to loosen the plastic backing so I could cut another thread to remove his extra claw weapon. Pain in the ass? You betcha! But at least the wires aren't made out of... uh, wire, anymore.
Straight out of the box this second Megatron from the Prime 'RID' series is pretty impressive. Sadly, I don't as of yet own the First Edition (never came upon it), which is a bit smaller scale, more of a silvery color and more beautiful. The gimmick of the RID figures is apparently translucent plastic parts. In Megatron's case, he's mostly all light gray with a silver face, a few off shades here and there... and royal purple (a color signifying his Supreme Decepticon Pride) which is both solid and a lot of transparent. I like translucent parts so I've got no problem.
The head sculpt is pretty fucking awesome once you get a closer look at it, and the figure holds up pretty solid. His fusion cannon has a push switch that slides a middle blade outward and two outer blades around and down that form his Forearm Sword. When you press the feature and it all combines together, and orange LED light shines like a laser sight (which you gotta admit is pretty badass!). Once transformed, Megatron is of course a gnarly Cybertronian Jet. His claw weapon connects to his Cannon which then pegs onto the top of his Jet mode, producing a much needed third darker gray color to offset the light gray and purple.
This version of Megatron is a strange mix of the Film version, Animated and little bits of previous. And I think it works magnificently! He's not all jumbled and unrecognizable as the film version, but still some of the better attributes from that design remain which is nice. Overall the design is sleek and menacing. The only extra kibble on this figure is an incredibly small backpack with some shoulder wings that nothing can really be done about. You can fold them completely back so they're not visible from the front, but then they're protruding outward from the side angle, or you can store them up or downward. Storing them downward shows off his jagged pointy spiked shoulders a bit more, whereas upward you get some extra upper body and shoulder width. Either way it looks OK to me, but I think I'll keep them up. A closer look, coming soon... 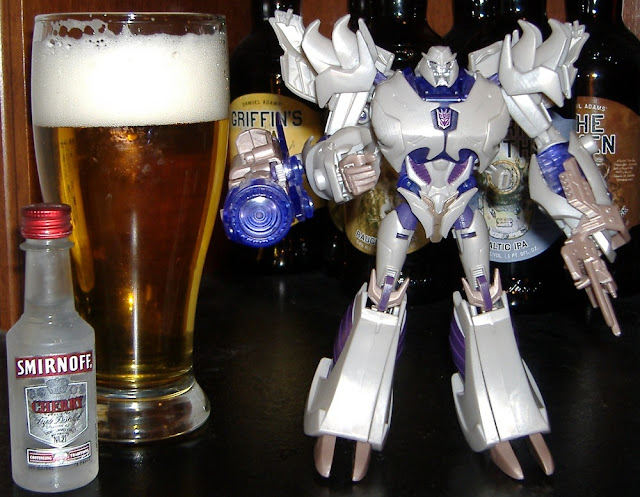 I was impressed by his brushed paint work, but I wish that his plastic was a darker grey. I am very much liking the look of these Prime figures. They have just the right amount of movie and Animated looks to make them sexy!

I looks forward to seeing more!!