About: "Smokey and Rich with a bit of Mischief. Unusual and playful, this half-breed brew begins with a rush of smoky, almost savory, aromas and flavors. The distinctive campfire smokiness of a rauchbier lingers and begins to reveal the rich and velvety malt smoothness of a double bock with notes of toffee and caramel. This roguish brew transforms from its bold start to a hearty and satisfying finish." 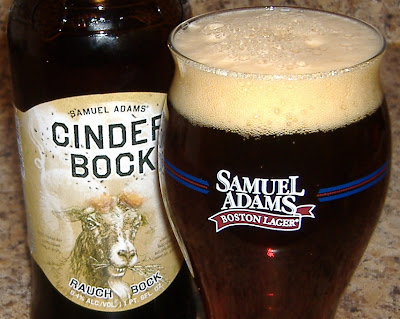 Thoughts: Cinder Bock poured a very rich and deep hued mahogany. An absolutely beautiful color. The beer is almost transparent and carbonation bubbles are rising all over the place. The tinted off-white head was very slow to form and left nothing but a ring around the edge of the glass after about a minute.

The scent is very light on this one. There's hardly anything at all. Caramel candy and smoke is what I'm getting, but it's so faint.

Well unlike the smell, the taste of this just exploded in my mouth on the first swig. This is one strange beast. I'm going to have to examine the tastes to figure out what this is, but while I think about that the very last bit I'm getting is a strong burn of alcohol. Okay, I'm getting a lot of smoke, toffee and a caramel background, and... that's about it. I have a feeling that I'm drinking this way too soon. Then again, it's not exactly my favorite style either so who knows. There's a touch of spice in there. After a while I notice that the taste never goes through any changes. It's very up-front and it is what it is: One note, and not exactly bland, but just bland enough.

Mouth feel is a light to medium that's easily drinkable, and it's kind of silky.

I don't know about this one. Something about it just feels incomplete. I want to like this one, but uh, yeah, it's not really going to happen I don't think. It's a heavy alcohol, smokey malt bomb with a quick rush of flavor that instantly fades away, leaving a hazy cottonmouth of an aftertaste. It's not bad at all. It makes me wonder what this would have tasted like a year from now, but not so much that I'd spend the money to find out. :( Oh well, Batch #2 of Griffin's Bow was just released with this. Maybe I'll do something along those lines with that one.