About: "Enter the Labyrinth, a multi-dimensional black ale. Discover the complex intermingling of black licorisha nd toasted oak. Seek the subtle hints of bittersweet chocolate. Flavors are enhanced when served cool, not frigid. / Labyrinth Black Ale, from Uinta's new Crooked Line, was triumphant in its first competition since it was conceived earning a Gold medal in the Imperial Stout category of the competition at the 2010 North American Brewers Association Awards. Aged in rye barrels." 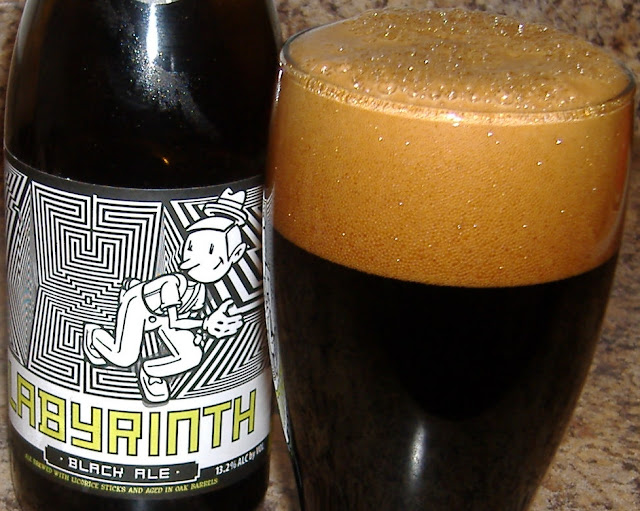 Thoughts: After about five minutes of pacing back and forth between trying to pry this fucking cork out, I wiped the sweat from my brow gave it one last tug. It didn't even pop, either. This one must be playing hard to get with me! Labyrinth poured a nearly pitch black straight out of the bottle. That's rare. The frothy head is one of the darkest I've seen as well, resembling a rich brown cocoa color.

Smells heavily of chocolate malt, very boozy and there's a little bit of that black licorice underlying there. It doesn't really smell fruity, but rather just a bit tangy.

Hmm. I actually expected a bite of my first sip, but things remained calm. Interesting. This is very, very malty. On the second gulp there's a tingling of fumes, and that subtle black licorice taste. Confession: I love black licorice! Can't stand the red shit. It's pretty mellow in this beer though... like way too mellow. I'm going to let the second half of the bottle warm up while I type this review to see if it stands out more later. After a few gulps and breathing in for a while, the oak barrels that this was aged in becomes more apparent. There's some light sawdust smoke on my tongue. Better keep drinking. Fifth gulp and I got major alcohol haze with this one and a lot more wood. That's pretty much it.

I enjoyed this Black Ale / Stout, but was disappointed with the lack of black licorice tastes here. I was hoping that it would stand out a lot more than it did (I had the same minor problem with the Maple Syrup in the Dogfish Head / Sierra Nevada collaboration Life and Limb). Maybe I'm just hard to please. This is my first Uinta beer, and I'm sure I'll be trying two or three more of their Crooked Line sometime soon. The artwork on this bottle is really cool and eye catching, and of course, I can never pass up a Black Ale. Next time I lay down thirteen bucks, I want double that licorice though!